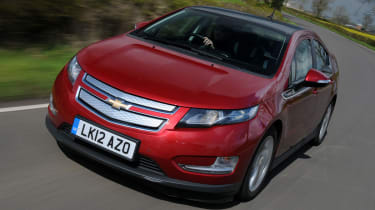 Range-extending electric cars are a little like buses – you wait ages for one to turn up, and then two arrive at the same time. Hot on the heels of the Vauxhall Ampera we tested in April comes the equally eco-friendly Chevrolet Volt.

Essentially, the Chevy and Vauxhall are the same car – they’re both built on the same production line in the US – which means both benefit from GM’s innovative Voltec range-extending powerplant. At the heart of the system is a 148bhp electric motor that’s powered by lithium-ion batteries which deliver a useful 35-mile range.

However, unlike a conventional electric car, you won’t be stranded by the roadside when the battery pack runs flat, as the Volt also features a 1.4-litre petrol engine that acts as a generator. This keeps the batteries topped up with charge for around 235 miles, or until you can plug the car back into the mains.

As you’d expect from such a hi-tech car, the Chevrolet certainly stands out on the road. The sleek aerodynamic lines and low roof give it a far more upmarket appearance than the plain Golf and familiar Prius, while the bold Chevy grille and optional £490 chrome-finished alloys add a touch of transatlantic glamour.

The futuristic feel continues inside, where you’ll discover a hi-tech dashboard design that’s dominated by a wide centre console, topped by a large, full-colour touchscreen for the climate control, comprehensive trip computer and £1,745 optional sat-nav and Bose stereo. And while the white trim finish looks and feels a little cheap, the novel touchpad switchgear works surprisingly well.

A second LCD display located in front of the driver displays speed, as well as the expected range in both electric and range-extending petrol modes. It also features a hovering green ball that indicates how efficiently you’re driving – if the sphere turns yellow, then you’re using too much energy.

While the Volt’s cabin doesn’t quite have the quality feel of the Golf’s, it beats the VW hands-down for kit. Standard features include leather trim, heated seats, climate control and Bluetooth connectivity. And while some of the plastics feel a little low rent, the cabin is well built.

The need to house a large T-shaped battery pack under the floor has spoiled the Chevy’s family friendly credentials. Unlike its rivals, the Volt is a strict four-seater, with those sitting in the back getting much less legroom than in the Prius. The 310-litre boot is also the smallest here, and it has a cheap fabric cover for a parcel shelf.

On the road, the Volt comes into its own. In electric mode it delivers seamless and near-silent acceleration. What’s more, at the track it was the fastest of our trio, getting from 0-60mph in just 9.2 seconds – that was 1.5 seconds quicker than the Golf.

Better still, the transition between electric and range-extending modes is flawless, with only a graphic on the dashboard display letting you know that the petrol generator has fired up. In fact, you’re only aware of the 1.4-litre engine when it’s at high revs, delivering maximum charge.

Away from the track, the Volt is a capable performer. You can feel the weight of the batteries through a series of corners and the steering lacks feedback, but there’s decent grip. And while the brakes are sharp, they deliver strong stopping power.

Adding to the appeal are the decent refinement and firm but composed ride, making the car a relaxing long-distance cruiser. However, around town, the thick A-pillars create significant blindspots.

But the Chevy is much better equipped, and company car drivers will save a packet in tax. If you can charge it at least once a day, you can expect significant fuel savings. Even when running in range-extending mode for long periods, we still managed to return 95.4mpg.

The question is whether this low thirst for fuel can offset its significant price premium.