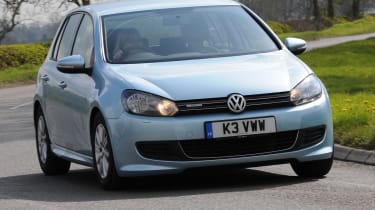 Incredibly, the VW Golf is the old-fashioned choice in this test. With its traditional diesel engine and five-speed manual gearbox, the hatchback can’t match the Chevrolet or Toyota in terms of hi-tech appeal. However, don’t discount the efficient BlueMotion model just yet.

Thanks to stop-start technology, energy-saving engine components and optimised aerodynamics, the Golf promises to deliver the same sort of low running costs as its rivals, at a fraction of the initial outlay.

It also provides the same quality, practicality and composed driving dynamics as the standard car, which is our current family hatch favourite.

As you’d expect, the sober-suited Golf can’t match the Volt for head-turning kerb appeal. BlueMotion models add a neat aerodynamic bodykit and 15-inch alloy wheels, but it still looks a little dated alongside its futuristic rivals.

It’s a similar story inside, where the VW is functional rather than fashionable. Yet while the simple dash and traditional analogue dials lack the glamour of the Volt’s futuristic LCD screens and touchpad switchgear, it’s beautifully built and logically laid out.

What’s more, all the major controls are beautifully weighted and have a crisp action. And a wide range of seat and steering wheel adjustment helps give the Golf the most comfortable driving position. There’s not very much kit, though.

While air-con, a trip computer and a DAB digital radio all feature, you’ll have to fork out for luxuries such as a leather steering wheel and electric rear windows – both are standard on the Chevy and Toyota.

Plus, the list of factory-fitted extras is surprisingly short, with no option to add sat-nav or leather seats. To get the same level of kit on the Golf, you’ll have to spend £24,095 on a fully specced and dirtier Match 1.6 TDI.

At least there’s plenty of space. As with the Prius, the VW has room for five adults, while occupants in the back have more head and legroom than in the Volt. The interior is also littered with useful storage, including the huge, flock-lined door bins and large glovebox. And while the 350-litre boot gives away nearly 100 litres to the Toyota, it’s well shaped and can be extended to 1,305 litres with the rear bench folded flat.

After stints in the Volt and Prius, the Golf feels entirely normal to drive. The 104bhp 1.6-litre diesel is smooth and torquey, while the five-speed manual gearbox delivers slick shifts. Yet at the track, the VW was the slowest of our trio, needing 10.7 seconds to complete the 0-60mph sprint.

Yet for most buyers it will be performance at the pumps that matters most – and the VW doesn’t disappoint. Over a varied route that included crowded city streets and fast-flowing motorways, the Golf returned an impressive 58.9mpg. CO2 emissions of 99g/km mean the BlueMotion is exempt from annual road tax, too.

Factor in the car’s £20,015 price tag and extremely strong residuals, and it’s clear the VW leads the way for value – although its 13 per cent Benefit in Kind tax rate results in the biggest company car tax bills. But that’s the only fly in the financial ointment.

More worrying for the Golf BlueMotion is its miserly standard kit count and compromised comfort. Will these flaws cost it dearly in the final reckoning?