Can recent raft of updates keep the top-selling hybrid at the front of the pack? 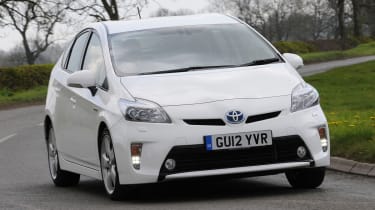 The Toyota Prius is the world’s best-selling hybrid and the most recognisable petrol-electric car on the road. Yet despite its familiarity, it looks just as futuristic as the Volt.

What’s more, a recent facelift has further improved the Toyota’s styling. At the front is a revised grille and headlamps, while new LED tail-lights mark out the rear. As before, the Prius has excellent aerodynamics, and its slippery 0.25Cd drag factor is the lowest of our trio. It also has the longest wheelbase, which helps boost cabin space.

Rear legroom is excellent and, unlike in the Volt, you can seat three across the rear bench. Better still, the Toyota’s 445-litre boot is easily the biggest here, despite housing the batteries for its hybrid powerplant beneath the floor.

Up front, the dash looks almost as sci-fi as the Volt’s. The absence of traditional dials, plus the centrally mounted digital speedo, stubby gear selector and head-up display, all add to the futuristic feel. Meanwhile, the familiar Toyota Energy Monitor shows the power flow between the engine, electric motor and battery pack.

The recent revisions also include a host of new consumption monitoring functions, including one that calculates the cost of each journey.

Despite improved trim and upholstery, the Prius still feels a little low rent alongside the classy Golf. Yet there’s no faulting build quality, and with a large double glovebox and a handy stowage area behind the ‘floating’ centre console, the cabin is practical, too. New front seats offer a wider range of adjustment, and comfort has improved, plus visibility is far better than in the Volt.

What hasn’t changed is the way the Prius drives. Guide it gently around town, and you can stay in full electric mode for around a mile, while even with the engine running the car is fairly relaxed.

However, press the throttle hard, and the CVT gearbox sends the revs sky-high under hard acceleration – ruining refinement and upsetting economy in the process. As a result we only averaged 46.3mpg on test. Yet even when the engine is working hard, acceleration isn’t a match for the far calmer Volt, while cruising on the motorway is also a less restful experience.

Like the other cars in this test, the Prius has a firm ride. However, the 2012 model aims to offset this with sharper handling. A stiffer bodyshell and extra bracing for the steering column have improved the car’s driving dynamics, helping to deliver greater poise and agility through a series of corners.

But like the Chevrolet, the regenerative braking system has a negative impact on brake pedal feel, making it hard to brake progressively and smoothly, while low-speed manoeuvring can be a little jerky.

With emissions of 92g/km on 17-inch wheels (standard on the T Spirit tested here), the Prius is fractionally cleaner than the Golf, but we found the conventional diesel more fuel efficient over our mixed use test route.

And although the Chevrolet is more expensive to buy, it’s a cheaper company car due to its five per cent tax rate. So is Toyota’s established hybrid the best compromise? Or is it outclassed in this shoot-out by the traditional VW and futuristic Chevrolet?