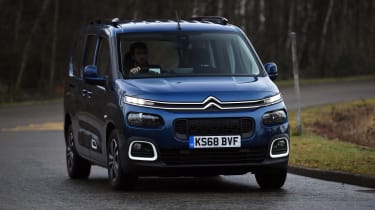 Whether you pick a petrol or a diesel, the small PSA group engines tend to sip fuel at a lower rate than the majority of rivals. The pick of the range is the top-spec BlueHDi diesel with 128bhp; this returns 45.2mpg to 50.1mpg when equipped with a manual gearbox, or 45.1mpg to 50.3mpg with an automatic – both measured under the latest WLTP test. By extension, the different variants of the same 1.5-litre unit all achieve similar numbers.

The petrol models are less frugal, with the 1.2-litre turbocharged offerings returning 37mpg to 43mpg, which should enable a real-world range of up to 500 miles from its 61-litre fuel tank. Both petrol and diesel variants benefit from stop/start technology as standard, which helps to save fuel in heavy traffic.

CO2 figures (measured using WLTP regulations) range from 108g/km in the lowest-powered diesel model with a five-speed gearbox, rising to 131g/km in the highest-powered petrol model; these figures do not change if you opt for the long-wheelbase versions. 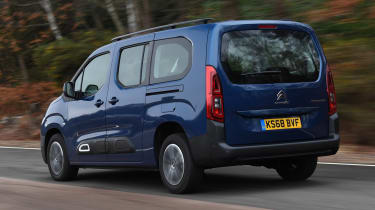 VED rates are largely similar throughout the range, with every model bringing a first year charge of either £165 or £205. For company car users, the Benefit In Kind rates sit from 26 to 28.

As the Berlingo offers little in the way of sporty intent, insurance costs should prove to be modest throughout the line-up. Group ratings start from 8 in the most basic 74bhp diesel, and climb to 14 for the most powerful BlueHDi model. This is on par with other van-based rivals, and much lower than Citroen’s more traditional MPV offering, the C4 SpaceTourer, which starts from group 18.

Low showroom prices mean that the Berlingo makes plenty of sense to family buyers on a budget. The mix of low costs and high appeal should translate into fairly competitive used values, too. Rival offerings like the Volkswagen Caddy Life are likely to hold onto more value – and conventional family crossovers and SUVs more still – but depreciation shouldn’t be disastrous. Expect your Berlingo to have lost around 30-38% of its value after three years and 36,000 miles come trade-in time.