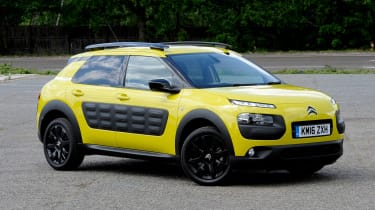 After years of making cars that didn’t stand out from the crowd, Citroen created something different with the C4 Cactus. We recognised that when we crowned it our favourite small SUV at our New Car Awards 2017. At the time we said: “In the C4 Cactus, Citroen has not only created one of the most characterful small SUVs, but also the best. As well as its cheeky character, it drives brilliantly, has a family-friendly interior and won’t cost the earth to buy or run – we love it!” Four years on, the gloss is starting to wear off, with the car scoring poorly in this year’s Driver Power survey, but if you try before you buy we reckon the Citroen is still worth a closer look.

From its earliest days Citroen has a history of innovation, with cars such as the Traction Avant, DS and 2CV unlike anything else on the market. But such forward thinking hasn’t always done the firm many favours, and on more than one occasion it went bust, leading bosses to tone down some of the futuristic design.

For years Citroen’s models struggled to distinguish themselves from rivals, but in danger of disappearing once more due to a lack of innovation, the brand took action a few years ago to create a range of cars that once again looked distinctive and pushed the boundaries.

Nowhere is that more obvious than with the C4 Cactus, a cross between a mini-SUV and a small family hatchback. 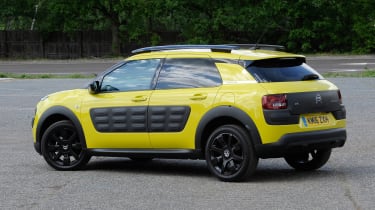 The C4 Cactus arrived in September 2014 as a development of the Citroen DS 3. Its major USP was its door-mounted Airbumps, designed to shrug off minor parking knocks, but it had the world’s first roof-mounted passenger airbag, too.

Buyers could choose from a 1.2-litre three-cylinder petrol engine, dubbed PureTech, and a 1.6-litre BlueHDi diesel.

While the diesel came in 91bhp auto or 99bhp manual guises, the PureTech was offered in 74, 81 or 109bhp forms; only the 81bhp unit was offered with an ETG (Efficient Tronic Gearbox) automatic.

We wouldn’t steer you away from any of the engines or trims, but would suggest that you buy a manual car, because the automated manual ETG isn’t nice to use. 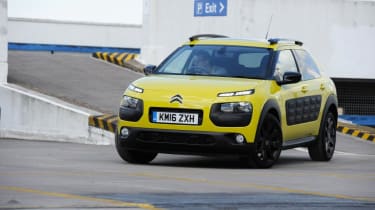 Alternatives to the Citroen C4 Cactus

The Cactus is a cross between a regular small family hatch and a mini-SUV. As a result its rivals are wide ranging and include the Ford Focus and Vauxhall Astra. Both are plentiful, generally well equipped, good to drive and practical, while being keenly priced. The Peugeot 308, which is related to the Cactus, offers most of these attributes, too.

If you’d prefer something more like an SUV, then there’s the Renault Captur and Peugeot 2008, plus the Nissan Juke.

The Vauxhall Mokka also competes in this segment; it’s not very inspiring, but it does offer a lot of car for your money.

‘Magic Wash’ washers claim to cut fluid use by 50 per cent, with a half-size reservoir, too.

Hill Start Assist was standard on all C4 Cactuses, apart from PureTech 75 and 82 Touch editions.

Some owners have found corrosion along the bottom of the doors, but only early cars are affected.

The PureTech petrol engine can suffer from misfiring. Switching to super-unleaded fuel seems to fix the problem. 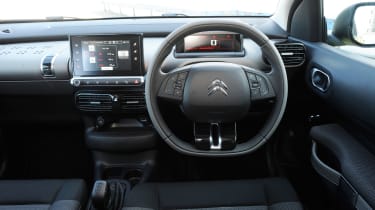 The C4 Cactus’s spacious interior feels cheap in some places, but the imaginative design makes up for those shortcomings. The rear door windows pop open rather than wind down and the steering wheel adjusts for rake only, but the uncluttered dash is available in an array of colours. Boot capacity is good, at 358 litres or 1,170 litres with the back seat folded.

All models need a service every 12 months or 16,000 miles. The first three are essentially oil and filter changes with a fluid check, at £152 each. Subsequent check-ups switch between minor and major, at £195 and £250.

The first of six recalls came in December 2016, due to the bonnet potentially opening of its own accord. Five campaigns were issued between April and October 2017 for possible automatic gearbox failure, the starter motor not working, fuel leaks and front bumper trim becoming detached. The most recent was again for a possible fault with the bonnet release.

The Cactus just made it into our Driver Power 2018 survey, ranking 74th in the top 75 cars, ahead of the Dacia Sandero. The highest scores were 64th for running costs and 66th for practicality. But for everything else the Citroen was rated no better than 72nd out of 75.