The new automatic Citroen C4 Cactus is much better than the last model, but the low-cost ethos takes a hit 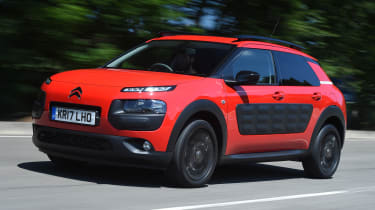 The new EAT6 automatic gearbox in the Citroen C4 Cactus is vastly improved over the old robotized manual. It’s much smoother to drive around town, is quicker to respond on the open road and doesn’t require too much of an efficiency sacrifice. It’s a good fit for the punchy Puretech petrol engine, although the additional outlay moves it a little further away from the car’s low-cost philosophy.

With a truly distinctive design and character that is absent from many small SUVs, the Citroen C4 Cactus once again picked up a coveted Auto Express New Car Award this year. But the quirky Cactus has always had a blemish on its copybook – the lack of a decent automatic gearbox.

Customers who were determined to have a self-shifter were lumbered with Citroen’s robotised manual ‘box, called ETG6, which was discontinued by 2016. Like many units of its type it was extremely jerky, with an infuriating pause between gearchanges hampering progress. Its simple three-button layout freed up a bit of storage space in the cabin, but Citroen used that to bring in a fiddly aircraft-style handbrake. 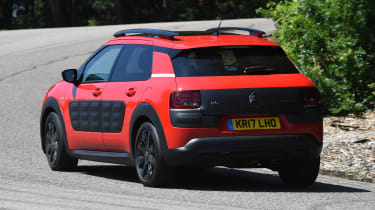 After a long period with only the manual shifter on offer, Citroen has finally brought in its latest ‘EAT6’ automatic gearbox on the mid-spec 1.2-litre Puretech 110 petrol engine. For now there’s still no diesel auto choice, though, which is a pity, and the most powerful petrol models also do without. Nevertheless, this new torque converter ‘box is greatly improved over the old drivetrain.

The six-speed EAT6 gearbox is already available in a number of Peugeots and Citroens, so we’re familiar with its performance. Changes are much faster and, most importantly, smoother than before, with much less lurching in town and faster reactions out of it.

It’s not as rapid-fire as some rivals’ dual-clutch systems, resulting in a 0-62mph time reduced by four-tenths over the manual Cactus. However’ in reality it’s a good fit with the middling Puretech petrol, which offers decent performance and a strong-feeling mid-range. Refinement is decent, too, despite the occasional shudder still being evident when you catch the gearbox unaware at low speed. In some situations, particularly for town dwellers, it’s actually preferable to the spongy manual gearbox. 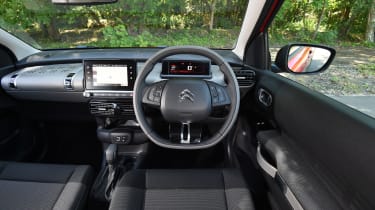 There’s a small impact on fuel economy, with a claimed 61.4mpg combined to the manual car’s 65.7mpg. It’ll cost £20 more to tax in the first year too, but compared with the £1,240 it’ll set you back to upgrade to the auto in the first place that’s not exactly a deal-breaker. Other than that outlay, our only real complaint is with the dated and slightly awkward multi-gate gearlever – most rivals make switching between drive and reverse a much simpler affair.  But there is now a proper handbrake.

Elsewhere, the C4 Cactus retains every trait that we’ve known and loved for the past three years. Soft suspension and lounge-style seats keep occupants isolated from all but the harshest bumps, while the low kerbweight benefits economy and helps it feel nimble around town. 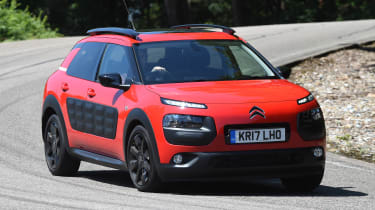 The styling, while not to everyone’s tastes, is refreshingly different from the norm inside and out, while save for a few sub-par materials, quality is pretty good. Our only concern is that the price is creeping towards the territory of bigger and plusher SUVs in this spec; the manual Puretech 110 in Feel trim fits in better with the Citroen’s value mantra.