The Citroen C4 Cactus SUV has had a mid-life facelift, with suspension updates and more conventional styling

Citroen’s C4 Cactus has grown up. Once a wacky, slightly left-field choice that was more Marmite than conformist, the new car is slightly more conventional. That’s true of the styling, which has been refined a little, and the Cactus now looks a little more like every other SUV. However underneath the changes are anything but conventional. There’s a new type of suspension system that gives a comfortable and cosseting ride but also gives Citroen a USP in the crowded small SUV market. While some of the wackiness has been toned down, the Cactus has grown up and now stands confidently whilst still holding onto enough of its old unique personality.

A French revolution has been happening at Citroen for the past few years. For a long time Citroen’s well-known eccentric take on styling had been shunned for conformity, but it all changed with the C4 Cactus.

This was a funky-looking quasi-SUV with an interesting interior and mad air-filled plastic squares on the doors, known as Airbumps. In one fell swoop the C4 Cactus showed exactly where Citroen was going and exposed the regular C4 hatchback as dreadfully dull.

However, the C4 Cactus has been on sale for nearly four years now, so Citroen has decided it’s high time to give it up an update – but as updates go, this is quite a big one. 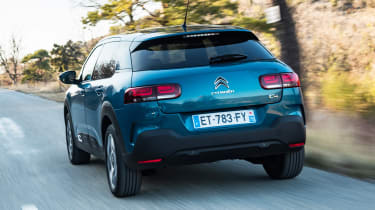 Unusually for a mid-life facelift, it’s not a case of fancy new wheels and different trim colours, but the new Cactus is another sign of Citroen returning to its brand values and trying to makes its cars stand out. With cars like the Traction Avant, 2CV and DS, Citroen rubber-stamped the idea it was a builder of comfortable cars. But over the years Citroen moved away from this USP.

The new Cactus, Citroen says, is a return to those days. As it’s a mid-life update and not a brand new model, it still uses the relatively elderly Peugeot 208/DS 3 platform, but there’s a new type of suspension. It’s not as revolutionary as the original Citroen DS’s hydropneumatic system of 1955 but it’s still quite radical compared with the cars the Cactus rivals. It’s called Progressive Hydraulic Cushion (PHC) suspension and it adds a pair of hydraulic dampers into each suspension corner. In so doing, it replaces the rubber bump stops used on most cars of this type, including the outgoing C4 Cactus.

Put simply, because the dampers cushion the wheel travel at the top and at the bottom of the coil suspension unit, Citroen has been able to fit softer springs and dampers. In so doing, a ‘Magic Carpet Ride’ feeling has been achieved, says the firm.

It’s a bold claim but it seems – on smooth French roads at least – that Citroen is telling the truth. The suspension does its best work on undulating roads – the wheels stick to the road while the body is well suspended; it’s like it floats from crest to crest. With such a soft set-up you would presume there would be quite a bit of bounce between compressions but again, the Cactus impresses and it seems to float along well. Even hard cornering fails to disrupt the car’s composure; sure, there’s quite a bit of body roll but it’s nicely composed and unflustered. 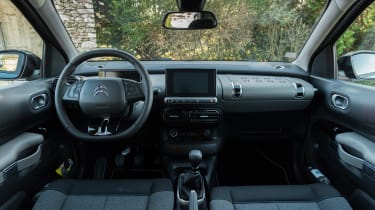 Our test car was a range-topping Flair with a 1.2-litre 128bhp three-cylinder petrol engine. It’s a new engine for the Cactus but it has been used in a variety of Peugeots, Citroens and DS models for some time, and just like in those cars, it’s a good engine. It delivers a good amount of poke low down in the rev range and it feels as fast as the 8.2-second 0-62mph sprint time. There’s that distinctive three-cylinder thrum under hard acceleration but it’s never coarse and settles down to a barely audible level when cruising.

The six-speed gearbox is far more pleasurable to use with this engine compared with other Cactus models; the gear knob feels more substantial than before, and the shift action is better too, thanks to a shorter throw. Factor in well-weighted and accurate steering and the Cactus feels slightly more fun and a whole lot more refined than before.

We suspect the PureTech 110 will be the pick of the range in the UK, though for diesel buyers there’s only one choice – a 1.6-litre BlueHDi with a five-speed manual gearbox. As before, there’s no four-wheel drive – just Peugeot Citroen’s Grip Control, which alters the traction control system depending on terrain, and is available on certain models. 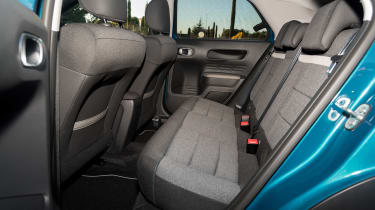 Until May, Citroen is offering the new Cactus with an 81bhp 1.2-litre petrol in a special Feel Edition trim for £17,265, but it’s best avoided. Not only is the engine bereft of a turbo and consequently rather breathless, it also does without the PHC suspension that is standard across the rest of the range. From May onwards, the PureTech 110 in Feel trim will be the entry-point, at a whisker under £18,000.

It’s not just the suspension that Citroen has played around with but also the seats. In a small throwback to the original DS, the seats have been designed to be big squashy sofas and make for a welcome relief from the small SUV class norm.

Elsewhere, the interior is identical to the old C4 Cactus’s – so there’s a smattering of soft-touch plastics but rather too many scratchy surfaces in too many places. The design remains pleasingly different and the vast majority of functions are controlled via the standard-fit seven-inch infotainment system. That also means the major controls like the climate control aren’t easily reached and are accessed via menus rather physical knobs and buttons, which is more difficult to use than it really should be. 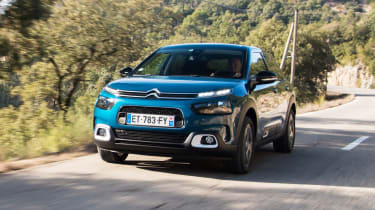 Interior space remains the same, naturally, with adequate space in the back and a class-average boot (358 litres with the seats in place and 1,170 litres with them folded), but practicality has been boosted with a 60:40 folding rear bench; in the old Cactus is was a one-piece affair. It’s a shame to see the pop-out rear windows of the old Cactus have been carried over to the new one, but the roster of standard safety kit has been improved with features like Active Safety Brake, Lane Departure Warning and Blind Spot Monitoring now available.

On the outside Citroen has actually toned down the wacky looks and instead plumped for something a little more conservative. The front gets a new grille, bumper and chrome trim leading from the badge to the day-running lights aping the smaller C3 supermini, while the rear has larger, horizontal lights – but the big change is to the Airbumps. On the old Cactus they were like large slabs of Dairy Milk chocolate but in keeping with the C3 hatchback, C3 Aircross and forthcoming C5 Aircross SUV, there’s only a small row of bumps along the bottom of the doors. Worse still, while there are new interior colour choices, the vibrant exterior colour palette of the old Cactus has made way for a rather boring selection of greys, blacks, whites and one bright red.

Citroen says this more grown-up look will distance the Cactus from its Aircross SUV range and will align the Cactus with the next C4 hatchback, but we fear that the model has lost a little of its quirky charm. But the reality is while it has undoubtedly grown up, the new suspension and seats make the car more appealing on a practical rather than a subjective level. And while some of the wackiness has gone, there’s still enough of the old car’s appealing character still here, along with the added benefit of more comfort and refinement.