Is this Britain’s best new hot hatch? We did the ultimate test to find out 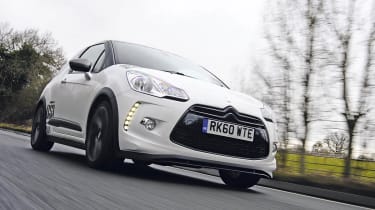 The DS3 Racing acquits itself well against rivals such as the Polo GTI and MINI JCW. It’s fast, looks great and the steering is full of feedback. It’s economical, too – but its strengths are also its downfall. While the supple suspension and powerful engine make it comfortable, the new car is simply not different enough to the less powerful, but far cheaper, 1.6 THP 150 model – which is  the version we’d recommend.

Advertisement - Article continues below
At last, Auto Express has got behind the wheel of Citroen’s hottest hatch in the UK. And to really put the DS3 R through its paces, we arranged a 300-mile trip starting in London, taking in the homes of two British motor industry titans, before delivering the car back to Citroen in Slough, Berks.
[[{"type":"media","view_mode":"content_narrow","fid":"69256","attributes":{"alt":"","class":"media-image"}}]]
This video review is brought to you by our sister site, CarBuyer.co.uk
When we drove the model in France in December, it proved comfortable and very fast. Can it pull off the same trick on a mix of urban roads, uneven country lanes and motorways?
First up is a 60-mile dash to Goodwood, West Sussex, to say happy anniversary to Rolls-Royce – and one thing is immediately apparent. Our car, finished in Polar White and Carbon Grey, is a nightmare to keep clean! Despite the grime, it looks fantastic with its 18-inch alloys, carbon fibre trim and eye-catching decals (a £450 option). Citroen also offers a Sport Orange and Obsidian Black alternative.
Advertisement
Advertisement - Article continues below

Comfort is impressive – better than a MINI JCW or a Renaultsport Clio 200, and much appreciated on a long early-morning drive. But the suspension is firmer than the standard DS3’s, as well as 15mm lower, while the track is wider front and rear – and it shows.
Advertisement - Article continues below
Stability is superb, with only a hint of body roll to help the car feel more playful in the corners. Thankfully, the ride is still supple, too. The steering is light, as on lesser DS3s, yet provides plenty of feedback – proof that adding weight doesn’t necessarily add sportiness. Try the Abarth 500 if you don’t believe us!
The 136-mile drive to Aston Martin’s HQ in Gaydon, Warks, takes in motorways and winding B-roads, and one thing is for sure – the 204bhp engine is a peach. It has the same smooth-revving feel as the standard 150bhp unit, but charges for the red line harder from 3,000rpm onwards.
There are no pops or bangs from the tailpipes, although the exhaust has been tuned for a slightly richer sound. If you were hoping for something much louder, sharper and rawer, you will be disappointed – this car is more about refinement than racing, despite the name.
Our trip up the M40 gives us a chance to take in the wonderful interior. Fitted with chunks of real carbon fibre, it looks great, and feels even better. It’s a feast of gloss, matt and textured surfaces that makes even the MINI’s cabin seem understated. But weirdly, the £800 sat-nav option removes the USB connection – so it was the radio, not an Apple iPod, that provided the entertainment.
By the time we’ve tested Aston’s DB9 Volante Morning Frost, darkness has descended for the final leg of our trip. And without being able to see the gorgeous carbon fibre and ‘DS3 R’ stickers, something dawns on us. Citroen Racing’s first road car is too similar to the £16,300 1.6 THP 150 DSport – despite costing nearly £7,000 more. So while the newcomer is very entertaining, it lacks the vital spark to be a true great.
Advertisement
Share this on TwitterShare this on FacebookEmail
Advertisement