The new Citroen DS3 Cabrio has already impressed with its sardine tin roof - but does it work as well on UK roads? 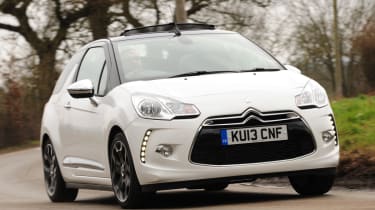 The Citroen DS3 Cabrio is an intriguing alternative to a MINI Convertible, and in some ways it’s better. It has more space inside, with usable back seats and a bigger boot. The range-topping DSport is good to drive, and prices undercut the MINI’s. But the roof doesn’t give you the same open-air sensation as a full convertible.

Despite our unpredictable climate, the UK still has one of the world’s largest markets for convertibles. And now there’s a new drop-top supermini aiming to make an impact here – the Citroen DS3 Cabrio.

We’re big fans of the standard DS3 hatch, as it offers more space and comfort than its MINI arch-rival. With the Cabrio, Citroen has managed to preserve the packaging by using a peel-back canvas roof, rather than a full-on drop-top. It means the doors, side windows and frames all remain intact, which reduces costs, while maintaining interior space and structural rigidity.

In terms of appearance, the Cabrio is pretty much identical to the hatch, save for the canvas roof, a smaller rear window and a chrome strip across the top of the bootlid. Overall it looks smart, and there is a wide range of body colours on offer. The roof is in a black fabric as standard, and there are two optional shades – our car featured the Infinite Blue finish.

Climb inside and, besides the roof switch on the header rail, the Cabrio’s interior is identical to the hatchback’s. That means impressive build quality with a smart gloss black dash, plus enough space for five people. At the back, the boot has taken a hit to make room for the roof, so space is down marginally from 285 litres to 245 litres. While this is still bigger than a MINI Convertible’s, the opening is small, making it tricky to load anything large.

Our top-spec DSport model gets a 155bhp 1.6-litre turbo petrol engine with a six-speed manual gearbox, and it feels just as quick as the hatch, with instant throttle response and a positive gearshift. In corners, the Cabrio isn’t quite as sharp as the regular car, with minor shakes and shimmies on mid-corner bumps – this is surprising considering how much metal has been left in place in the conservative conversion to drop-top.

The DS3 Cabrio’s party piece is its roof, but really it’s not much more than a giant sunroof. The top peels back in 16 seconds at the push of a button, and it can do so at motorway speeds if you want it to. But once it’s open, you don’t feel as exposed to the elements as in a full cabrio.

Some will appreciate the appeal of unruffled hair when travelling at speed, but it almost defeats the object of buying a drop-top.

There are compromises when it’s in use, too. The top stows on the rear deck above the boot, and obscures the rearward view. Moving the roof back to its mid setting leaves the rear window in place, but the sensation of open-top motoring is lessened.

This is a shame, because the DS3 Cabrio is otherwise great. The £2,650 premium over the standard car is a bit steep, but the Cabrio DSport still undercuts the MINI Cooper S by nearly £1,000, while the list of personalisation options is reasonably priced, too.