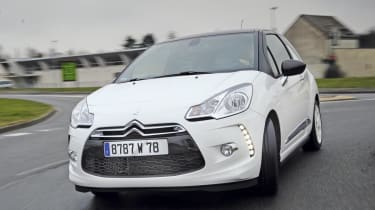 The new DS3 is an important car for the company. Not only does it carry pressure from its DS namesake, but it is also at the forefront of the Citroen’s latest design revolution. Thankfully, it fills those shoes well with a pleasing mix of classy looks and driveability. Add a responsive engine, neat handling and plenty of equipment, and the DS3 really impresses. The ability to customise it with an array of colours, decals and trim materials – as well as a wide range of frugal and fast engines – ensures its appeal should be long-standing.

Fresh, stylish and fitted with the latest technology, Citroen’s new DS3 looks set to be the most DSirable car the French firm has produced in decades.

The hatch is the first in a three-model line-up of exclusive DS models. But while the badge may hark back to the legendary DS of 1955, the new design owes more to the contemporary than the past.

A mind-boggling array of personalisation options is available – you can pick from 38 body and roof-colour combos and the range of trims, finishes and decals is almost infinite.

In the flesh, the DS3 looks like no Citroen that has gone before. And while some may think the floating roof a retro touch, the cut-off B-pillar, LED running lights and distinctive colour combinations leave it with a cutting-edge flavour.

Sporty touches include a rear diffuser, twin exhaust pipes, chunky alloys and a gaping grille. The shoulder line, that connects the shark-fin B-pillar with the door, combines with widening silver trim along the sill to give the illusion of a wider rear end – the result is a squat, purposeful shape.

A quick glance inside might suggest the experience will be a copy of the latest C3 but appearances can be deceptive. Although the dashboard is shared, most plastics are high quality, while the extra soundproofing heightens refinement levels. Only a touch of wind noise around the door frame lets the DS3 down when on the move.

As with the body panels, the cabin can be personalised with your choice of seat material, coloured panels and trim. The sports seats on our model were comfortable and supportive, and in conjunction with the adjustable wheel, made getting a decent driving position easy. Even tall drivers will find plenty of room, and the cabin feels more spacious than its rivals.

This theme continues into the rear, although the third back headrest is probably wishful thinking rather than a useable proposition. However, the 285-litre boot space is one of the biggest in the segment and combined with the split-fold rear seat makes for a practical compact hatch.

The turbocharged 1.6-litre engine has been co-developed with BMW, and is also found in the DS3-rivalling MINI. Fire it up and you’ll see the speedo and rev counter dials perform a sweep of their range, before settling at zero again. A quick blip of the throttle reveals a pleasantly sporty note from the twin exhausts, but the real revelation is the precise six-speed gearbox, which changes ratios superbly.

With 240Nm of torque available from only 1,400rpm, and an impressively linear power delivery, you could be forgiven for mistaking the 1.6 for a much larger, naturally aspirated powerplant. Plus you’d expect a Citroen to ride well, and the DS3 is no exception. The engineers shied away from the extra-stiff benchmark for this sector and added a degree of compliance that was instantly noticeable on our French route. It might roll a touch more in corners, but the difference is marginal, and in our opinion the car is the better for it.

Push hard and it won’t involve in the same way as a MINI, although it is still a tidy handler on twisty roads. Steering weight is well judged, too, but ultimately the rack doesn’t offer enough feedback, and you are left questioning what the tyres are doing.

On its own the DS3 is a great little car, that will likely give some of its rivals a real scare, but as a taster of what the revitalised Citroen car firm is capable of, then a new French revolution may be on the way.

Rival: MINI Cooper The MINI shares the DS3’s engine, albeit in a lower power output. But the Cooper leads the way in chassis dynamics and interior quality. The original customisable hatch has great residuals and running costs, too.