The Ford Capri retains a special place in the hearts of car fans. 50 years on, we look back at what made it great. 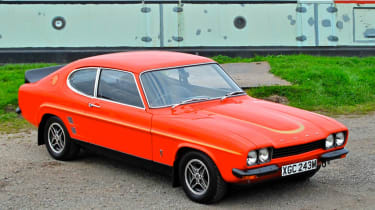 The Ford Capri was designed as the European equivalent of the Ford Mustang. First unveiled to the public in 1969, it was marketed as a cheap, fast and fun two-plus-two coupe, aimed at the blue-collar working man. It was a highly successful model for Ford, remaining in production well into the eighties, and selling almost 1.9-million units across its 17-year production run.

Marketed under the tagline “the car you’ve always promised yourself,” the Capri enjoyed huge success across Europe and the UK during its lifetime, and still maintains a strong fan-base to this day. It celebrates its 50th anniversary in 2019, so we thought we’d take a canter through the Ford Capri’s history and give you a run-down of its illustrious past. 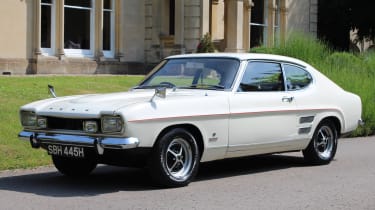 The Capri entered its design phase in 1965, a collaborative effort between Ford’s German and British divisions. Originally due to be named the Colt (as a nod to its big brother, the Mustang), it was penned to attract a younger audience, with its long bonnet, short tail and fake air vents in the rear wings.

Ford invested a total of £20 million in the project. The first car was completed in 1968, followed by a two-month production run prior to the official release date to ensure every Ford dealer forecourt had a Capri on show in time for its big debut. During this preliminary production run, Ford spent time in court with Mitsubishi, arguing about the rights to the Colt monika. Ford lost the case, forcing them to change the car’s name to the “Capri” for its official debut at the 1969 Brussels Motor Show.

Also, like the Mustang, the Capri had a large range of engines, which started with the 1.3-litre and 1.6-litre Kent four-cylinder petrols, producing 53bhp and 64bhp respectively. These were followed by Ford’s 2.0-litre Essex V4 (with 93bhp) and the range-topping 138bhp 3.0-litre Essex V6, both of which made the Capri capable of speeds in excess of 100mph.

Ford entered the MkI Capri into the European Touring Car Championship in 1974, spawning its final, and fastest, iteration; the RS3100. ETCC homologation rules stated that 1,000 road-going RS3100s had to be built in order for the race car to be eligible, so Ford diligently set about the project.

Or, at least, so it claimed. In reality, Ford built no more than 250 examples of the Capri RS3100, as the 1973 oil crisis and waning consumer interest strangled sales. The road car was fitted with a de-tuned version of the race car’s 3.1-litre V6 engine, producing 148bhp and around 250Nm of torque. It featured vented disc brakes, lowered and stiffened suspension, a sports exhaust and a functional ducktail spoiler, meaning it was capable of sprinting from 0-60mph in 7.3 seconds and could reach a top speed of around 125mph.

Though under-appreciated in its day, the Capri RS3100 is now regarded as the best-performing and best handling version of the first-generation Capri and can easily command prices north of £40,000 on today’s classic car market. 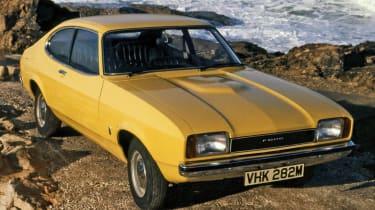 In response to the 1973 oil crisis, Ford decided to modify the Capri’s design for the 1974 model year, making it into a car more suitable for everyday use. Revisions included a shortened nose, a more spacious cabin, a more practical clamshell rear hatch and a foldable rear bench seat, all of which made the Capri easier to manoeuvre and easier to live with.

Ford also made the Capri easier to drive by softening its suspension, adding larger disc brakes for the front and providing buyers with the option of an automatic gearbox and power-assisted steering for the higher-specced models. To remedy its charging issues, Ford gave the MkII Capri a standard-fit alternator in place of the MkI’s dynamo and, to maintain its sporty look, “S” models and above got a new air-dam.

As part of the revisions, the second-generation Capri received a simplified engine range. The 3.1-litre V6 from the RS3100 was discontinued and the 2.0-litre Essex V4 was replaced by the more conventional 2.0-litre straight-four Pinto engine, with an improved output of 98bhp. The base model 1.3-litre and 1.6-litre Kent four-cylinders remained, and the 3.0-litre Essex V6 reclaimed its position as the range-topper.

However, the main change for the second-generation Capri was the way it was marketed. Ford introduced a range of trim-levels and specifications which appealed to a wider range of buyers, providing everything from a poverty-spec 1300L model (which included little more than an engine, four seats and a steering wheel), right up to the range-topping Ghia and “Midnight Capri” models, which featured unique paint finishes, alloy wheels and sports steering wheels. 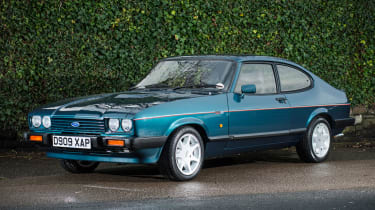 Known affectionately as Project Carla, the MkIII Capri began its design phase in 1976. Due to the project’s tight budget, it ended up being little more than a facelifted version of the MkII, with updates being limited to a set of redesigned quad-headlights, a pair of new wings, a new bonnet, fresh bumpers and updated paint and interior options.

In all, Ford spent around £480,000 on the development of the third-generation Capri, which is small change in comparison to the £20 million worth of development allocated for the first-generation model. To make up for the limited budget, Ford masked the Capri’s age through well-considered, cash-conscious trickery, repainting the MkII’s chrome bumpers and exterior trim in a more contemporary satin black and using existing tooling to create the MkIII’s trademark “hooded” bonnet. 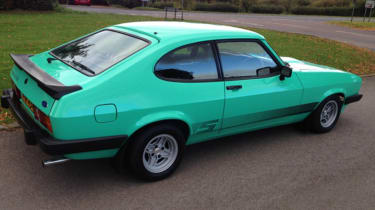 Also in the interest of saving money, the MkII Capri’s engine range was carried over to the MkIII wholesale, helped along with a few minor improvements. For example, Ford updated its ageing 1.3-litre Kent engine with a new crossflow cylinder-head (replacing the previous model’s outdated reverse-flow head) and reshaped cylinder bores, which greatly improved reliability. The 3.0-litre Essex V6 also received a redesigned intake to prevent carburettor icing.

In 1981, increasingly stringent emissions regulations ousted the 3.0-litre Essex V6, which Ford replaced with a 2.8-litre fuel-injected V6 borrowed from the Granada. The reception to the new engine was good. Contemporary motoring journalists noted that, even though the Capri was priced to compete with the BMW 323i or Alfa Romeo Alfetta 2000 GTV of the day, its engine was larger, it was cheaper to maintain, it offered a more refined drive and it was faster.

The Capri remained on sale until 1986, with its sales gradually declining each year as drivers grew more strongly enticed by smaller, faster and more practical hot hatchbacks. In 2010, Ford flirted with the idea of reviving the Capri nameplate with a new Focus-based three-door hatchback coupe, designed to rival the Volkswagen Scirocco, but its plans didn’t progress past the initial stage of design. The Ford Capri remains an iconic name even today, loved by enthusiasts and well worth its place in history for the way it made sports coupe style and performance accessible to mainstream car buyers. Ford is unlikely to hear calls for a new Ford Capri reprising the original formula fall silent anytime soon.

Have you ever owned a Ford Capri? Tell us about your experience in the comments section below…