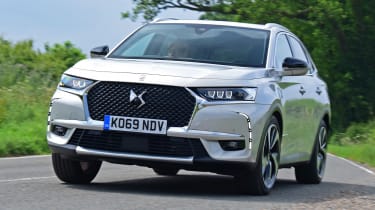 This is DS’s first plug-in hybrid, but, price apart, the E-Tense is now the pick of the DS 7 Crossback range. It’s swift, smooth enough, and the Active Scan suspension seems to work better here than in the standard car. It’s a practical SUV, too, but the interior and tech still lack the usability of other premium brands’ set-ups, while the price tag of nearly £60,000 for this model makes it hard to stomach compared with rivals such as Audi’s Q5 TFSI e.

We’ve tried SUVs from premium French brand DS before, but the DS 3 and DS 7 Crossbacks received mixed verdicts. However, the electrified variants have now hit the UK market, and they make a lot more sense than the petrol and diesel models.

Here we’re driving the battery-assisted DS 7, which is badged E-Tense. However, while the similarly named DS 3 Crossback E-Tense is fully electric, this larger model is a plug-in hybrid. It combines a 197bhp 1.6-litre four-cylinder petrol turbo that drives the front wheels with a 108bhp electric motor on the rear axle for a total of 296bhp and (selectable) e-four-wheel drive.

Of all the powertrains on offer, this suits the DS 7 the best – not least because it brings refinement to match DS’s premium aspirations. It’s surprisingly keen to run on electric power, given its 1,900kg weight, and all-electric range stands at up to 40 miles.

Even when the DS 7’s petrol engine does kick in, the e-motor’s 337Nm of torque (37Nm more than the petrol unit produces, and available instantly) takes the load off the engine so it doesn’t sound that strained. 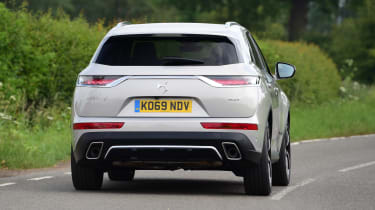 Ask for everything and the E-Tense will sprint from 0-62mph in 5.9 seconds, which is as fast as some hot hatches. That figure highlights how an electric motor can boost performance as well as efficiency, and while the eight-speed automatic isn’t the quickest gearbox, its changes are mostly smooth.

DS claims economy of between 166.2 and 235.4mpg, but as with any plug-in hybrid, how frequently you charge it will have a direct bearing on your efficiency.

With a home wallbox supplying 7.2kW to the E-Tense’s 13.2kWh lithium-ion battery, a full charge from empty will take an hour and 45 minutes, which is impressively quick, given the electric range on offer.

The weight of that battery, located low in the chassis, also helps alleviate the bobbly ride you get in the regular DS 7 Crossback.

As standard, this E-Tense variant is fitted with the Active Scan system that uses a camera to monitor the road ahead and adjust the suspension accordingly. The set-up isn’t perfect, but the hybrid doesn’t bump and jostle around on back roads quite as much as the standard model. And while it’s still not the most settled in some situations, there’s enough suspension travel and compliance on A-roads, dual carriageways and motorways to keep you and your passengers relatively well isolated.

It’s quite practical, too, with a 555-litre boot and no drawbacks compared with its non-hybrid siblings. There’s a respectable amount of room in the rear, too. 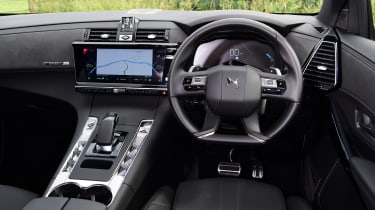 The low 35g/km CO2 emissions will help keep running costs down if you’re a company car user, but that price is hard to swallow, and it affects finance deals.

While the interior materials are okay, quality doesn’t quite seem up to the same level as the price tag, even if there are some nice metal finishes and leather trim.

The E-Tense doesn’t go any way to right the standard car’s wrongs when it comes to infotainment or ease of use, incidentally. The 12-inch screen and graphics on the 12.3-inch digital dash are fine, but the DS-specific skin is confusing to navigate around, and the tech could be more responsive.

At least you get lots of equipment for your money when you choose this top Ultra Prestige trim. Those dual displays are standard, alongside Apple CarPlay, Android Auto, sat-nav, climate control, LED headlights, heated and ventilated massaging seats, and semi-autonomous adaptive cruise, plus strong safety tech that includes AEB, lane-keep assist and blind-spot detection, parking sensors, a reversing camera and keyless operation.

However, even with all of this kit, and despite the improvements the E-Tense’s engineering brings, this top-spec plug-in hybrid DS 7 Crossback still looks pricey.