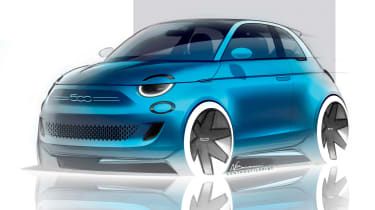 It's not in the interests of any designer to make everyone think a job was simple. But Klause Busse, FCA’s group design boss for the EMEA region, is candid as he boils the essence of the Fiat 500 down to two elements. He believes it’s all about the silhouette and the grille. Look after those features – cherish them, protect them – and the rest will come together.

When the project to create a third 500 started, Busse and his team at Centro Stile in Turin were quick to get their list of requirements across to the engineers working on the car’s electric underpinnings. “The initial months of the project were focused on what the platform was going to be,” Busse recalls. “Number one priority for us was the silhouette, because the 500 has a unique look. You can recognise a 500 from a long way away.

“It’s a legacy of the original 1957 car,” he adds, “because its engine was in the rear. But the 2007 car maintained it, and we knew we had to with the new 500. We played with some things, but there’s not much deviation before it starts to become not the 500. It is a very magic recipe.” 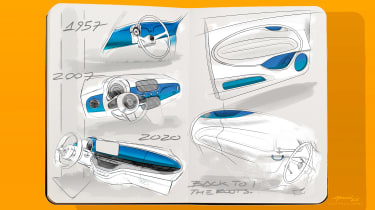 The 500 Electric’s front end wasn’t quite so simple, and the look of the headlights in particular gave Busse and his team real headaches. “On the original car, the clamshell hood’s cutline was uninterrupted, with the headlights beneath it,” he explains. “It gave the car a certain seriousness. Then the 2007 took the ‘eyes’, made them bigger, moved them up, interrupted the clamshell line and made the car a bit more optimistic, friendly and happy.

“For a long time we were playing with the idea of how we could get some of the ‘seriousness’ of the ’57car without losing the ‘optimism’ of the 2007 version.

“In the end, it was a beautiful key moment in the process. It was late in the evening, there was the designer of the car, the chief of the studio and myself, all sitting at a desk, sketching. And this idea emerged, to let the 1957 car’s line cut through the lights. We took this idea to engineering and they were able to design a two-piece headlight for us, where the daytime running light is on the hood, and the main light function is beneath that cutline.

“I’m really happy with how it turned out. It’s a great example of how a project like this is a combination of many people, with so many ideas and abilities. We had a creative moment, but it couldn’t have worked without engineering too. And that can be said for so many elements on this car.”