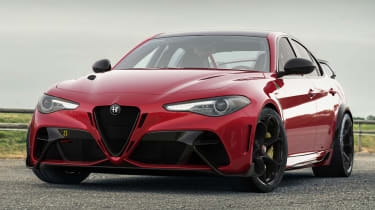 Alfa Romeo is bringing back the GTA badge on the new Alfa Romeo Giulia GTA to celebrate its 110th anniversary. The car takes the Giulia Quadrifoglio as its base shedding weight and introducing a package of aerodynamic tweaks. There are two versions - alongside the GTA is the GTAm, which takes things further with full racing seats, a roll cage, and the deletion of the rear bench.

Just 500 examples across both the GTA and GTAm iterations will be made available. In euros, the Giulia GTA will cost from €176,500, with the GTAm setting owners back at least €181,500. For UK buyers, Alfa says that the price will be converted to Sterling at the point of purchase. It means, with current exchange rates, buyers are looking at price tags of around £154,000 and £158,000.

The Giulia GTA retains the Quadrifoglio’s engine - a 2.9-litre bi-turbo V6 - but power swells from 503bhp to 533bhp. There’s a new exhaust system and carbon fibre is used for the driveshafts, bonnet, roof, front bumper, front wheel arches and rear wheel arch interiors to save weight. The engine uses more aluminium, as do the doors and the suspension components. 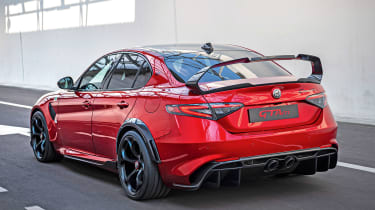 The GTA’s aerodynamic changes compared with the Quadrifoglio are obvious to the naked eye. There’s a far more aggressively sculpted front bumper with new air intakes, completed with a chin splitter on the GTAm. New side skirts are fitted, while a large new rear wing also takes its place on the bootlid. The car appears wider too, thanks to 50mm wider tracks front and rear. There are also suspension changes, including a new set of springs, shock absorbers and bushes.

There’s no doubt that the GTA is a hugely important car for Alfa Romeo in terms of what it represents and a resurrection of an iconic name for the firm’s past. Below we get under the skin of the new Alfa performance car with Fabio Migliavacca, Alfa’s European marketing boss….

Under the skin of the Giulia GTA

In September 2016, Alfa Romeo test driver Fabio Francia momentarily caught air at 162mph while heading over a crest into one of the fastest, most daunting corners on the world’s most fearsome race circuit. Minutes later, he was in the record books.

He was, of course, at the Nürburgring, and he had claimed the lap record for a four-door production saloon in the newly minted Giulia Quadrifoglio. The lap time of seven minutes and 32 seconds had confirmed Alfa’s return to performance-car form with a proper BMW M3-baiting super-saloon. Of course it has since been followed by a hot SUV, the Porsche Macan-rivalling Stelvio Quadrifoglio. 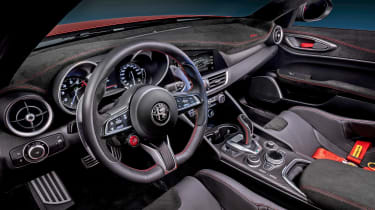 Nürburgring lap records are broken almost as quickly as they are set these days. But while the Giulia has since lost its crown, another Fabio plans to take the saloon back to the ’Ring – and soon. “We are already using lap time simulation to work out where we are right now with the project,” explains Fabio Migliavacca – Alfa Romeo’s current European marketing boss, and the man responsible for overseeing the development direction of the current generation of cars.

The ‘project’ he refers to is the Giulia GTA, a lighter, more powerful and focused version of the Giulia Quadrifoglio. And if Fabio’s admission is true, the GTA has the Nürburgring lap record, now held by the Jaguar XE SV Project 8, in its sights.

A classic name from the past

Alfa has named the car after its 1965 namesake, the original Giulia Gran Turismo Alleggerita. As with that car, the Alleggerita part is important. It means lightness, something the engineers have made a priority during development.

The makeover doesn’t reach quite as far as the original. In 1965, the Giulia Sprint GT’s transformation into the GTA replaced its steel body with one made from aluminium, but by contemporary standards, the new GTA has been extensively reworked. New materials, the removal of unnecessary items, and lighter parts throughout the chassis and drivetrain all contribute to the diet, while keeping room for four. 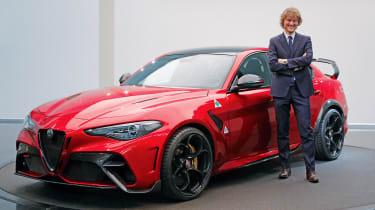 There’s even an extra special version. Called GTAm, this edition has the rear seats removed, and is the lightest that this super-saloon can get, shedding 100kg from the kerbweight of the standard Giulia Quadrifoglio. According to Migliavacca, this lightweight offensive is at the heart and soul of the GTA rebirth.

“The first thing was to pay a lot of attention to the meaning of GTA. So when we talk about GTA, it means Gran Turismo Alleggerita, referring to a lightweight version of a standard car. But when we say standard, in this case we’re talking about the Giulia Quadrifoglio, so the starting point is not so standard in the first place.

“From the engineering side, the aim was about being consistent with the meaning of GTA and reducing the weight of a car that has already been developed, with a lot of attention being paid to this area. So as you know, on the standard Giulia we have a part-carbon-fibre transmission, so in the end we had to work very hard to understand where we had the possibility to reduce weight further.”

The final weight of 1,520kg is backed up by two more very important tweaks. Firstly, the engine. The 2.9-litre turbocharged V6 has been reworked, with power rising from 503bhp to 533bhp. And it comes with a new exhaust system, too – a fully titanium set-up from specialist Akrapovic – which Alfa says gives the Giulia GTA a distinctive soundtrack. With launch control active, expect 0-62mph in just 3.6 seconds. 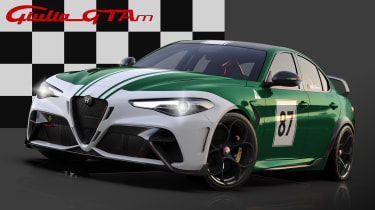 “At the same time as improving the amazing handling of the Quadrifoglio, we thought we should boost the power to improve the power to weight ratio further,” he explains.

“We are happy with 533bhp, but we are working on the speed in the corners to be effective from a handling point of view over outright top speed.”

The third all-important GTA ingredient comes in the form of aerodynamics. Active aero that is designed to reduce drag on straights and improve downforce in corners has been introduced on the Giulia GTA. The new front splitter, side skirts, rear diffuser and spoiler have all been developed using know-how from Sauber Engineering, which runs the Alfa Romeo Racing Formula One team.

“In regards to handling, the idea was to have something uncompromising. You know that already on the standard Quadrifoglio you have the active front splitter. But on the GTA we have a special fascia, plus new side skirts and the rear wing. There has been a lot of effort here.”

The meaning of GTA

Fabio explains that reintroducing the GTA badge has a deeper significance. As well as being a mark of Alfa’s engineering prowess, it’s also a very important birthday present, as the firm celebrates its 110th anniversary in June this year, and the GTA is the company’s love letter to itself. 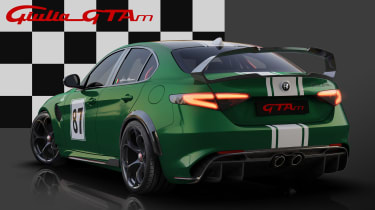 “From a marketing perspective it was a way for us to celebrate the 110th anniversary,” he explains. That would lead you to believe that the Giulia GTA is a one-off return for the badge and, while that’s the case for now, Migliavacca is open to the idea of more GTA models in the future.

As for what could come next with a GTA badge as part of this relaunch, we’ll have to wait and see. The Stelvio has a Quadrifoglio variant, and it was considered for GTA treatment, but Fabio’s team agreed it would not be correct. “We had a meeting to discuss the possibility of doing it on the Stelvio, but in the end we decided not to proceed.

To do an extra style like a GTA without seats and reduced weight would be strange and tricky on the Stelvio. And on the customer side, those who want great handling and performance would maybe not choose an SUV.”

Motorsport is intrinsically linked with the GTA badge, but this is not on the radar yet, either. “That would be great as a car guy,” says Migliavacca. “I grew up watching the BTCC and Super Touring championships. “A lot of people say ‘why are you not considering DTM [German touring cars]’? But compared with the 155 [which raced in the nineties], today it’s a totally different story. They are just silhouettes with a standard car for all the brands. It is not interesting for us. We will focus on production cars,” he confirms. We eagerly wait to see what comes next.

Click here to read more about the history of Alfa Romeo's GTA cars...