Boss reveals the thinking behind the new electric Fiat 500

It’s never easy to replace an iconic car, and it’s even harder when you reinvent it as an electric model. Fiat’s Olivier François tells us how and why they did it… 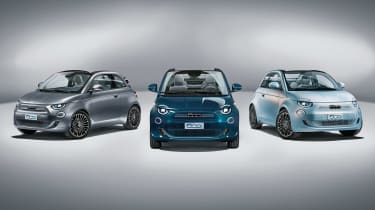 Very few cars are real icons. But where they exist, they’re a treasure and a curse for many makers: a banker when it comes to sales figures, but a nightmare when it comes to evolving them and keeping them up to speed with customer trends and developments.

So when the new generation of a car like the Fiat 500 arrives, it’s significant. And the latest new 500 – only the third iteration, after the original in 1957 and the reborn model, which arrived half a century later – is, in some ways, a huge departure from what’s gone before. Because for its latest model, Fiat has gone fully electric.

Olivier François, Fiat’s brand president, is bullish about the new arrival, not least because it has only been possible through significant development. Early on, Fiat realised that just adapting an existing car to be pure-electric wouldn’t work; the 500’s trademark focus on style and usability can accommodate electrification, as in the recently launched Hybrid edition, but not the extra battery capacity needed for an EV. And as a result, the new 500 really is new, from the ground up. 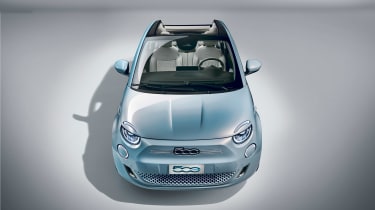 “This is not a Plan B,” François states. “It is not a current platform that we’ve tweaked to accommodate some batteries. It’s all-new. And this little car, once again, is totally relevant. This is our urban Tesla.”

But why build it anyway? Small city cars are already among the cleanest offerings on the market. Why has Fiat decided that now is the time to introduce a zero-emission 500 – particularly when, as François freely admits, the existing model will continue to be sold?

“The thing we know is that we have a successful nameplate,” he explains. “It is a leader in Europe; people love it. What we don’t really know, what we have no visibility on, is future demand for electric vehicles.

“But we need to be ready. We know that demand for sure will explode, because of the regulations in city centres. We don’t know to what level it will explode, but we are ready because we have one great nameplate with two approaches.” And yes, one approach still includes a combustion engine. “This will be the case for as long as there is a real demand,” François details. 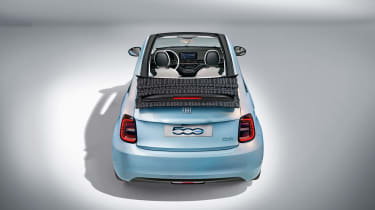 Even so, the specs of the electric model are punchy enough for it to be a real alternative for many petrol customers. There’s a 42kWh battery pack, delivering a range of up to 199 miles on the tougher WLTP efficiency test (given the use patterns of many urban users, that could mean a weekly charge). And the instant torque of the 117bhp electric motor means 0-62mph in nine seconds – although in truth, the shove from 0-30mph will be more impressive and relevant to most users.

These are ambitious numbers, and a 42kWh battery (not to mention the 85kW DC charger with it) doesn’t come cheap. We’ve yet to see UK specs and prices, but even now, François is candid about the fact that the 500 Electric will be “more expensive than a normal city car”.

He is comfortable with this, in fact, because buyers have traditionally been happy to ‘option up’ their 500s. “It depends a little on the region,” François says, “but the sales of the 500 are a little bit bipolar somehow. You have the base model, which is no more expensive than the [city car] market. And then you have the substantial proportion of our sales that are made with the very expensive 500. You know, the special editions, the convertible and so on. 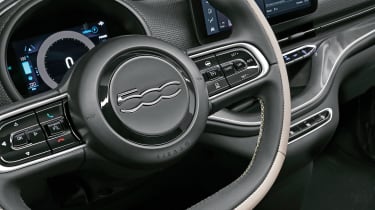 “There are still customers today for the €25,000 petrol version. I think that if we’re able to do that with an older car that’s not even electric, it’s probably going to be feasible with this new one.” More than that, as the first ‘new 500’ has evolved over the past 13 years, so the 500 Electric will help to futureproof the badge. “We are aware that this car will probably be on the market in 2030,” François says, “but it won’t necessarily be in the form you see. The car will evolve and stay relevant.”

Relevant means that this 500 will have to keep enough charm to remain classless – a vehicle aspired to as a first car, or desired as a fourth or fifth model in the household. François is clear on the goal. “It has to bring new customers to the brand,” he says. “The 500 has this power to pull new buyers coming from anywhere. I mean, people go from a Range Rover to a 500. They just want the thing, badly, because it’s so cool. So we thought because of this power of attraction, we really had the duty to use this to attract people to electric.”

That, beyond normal buying habits, could make the 500 Electric a real breakthrough EV. “I think you’re going to have a bit of a two-fold customer,” François says. “On the one hand, you will have people who are totally new to electric, who have never had an electric car but who are passionate about the design, the coolness, the statement that the 500 makes about who you are.

“The other aspect will be the fabulous fanatics, who are not necessarily green. It’s just people who want the 500, and they are very loyal. They have bought maybe two or three 500s over the past few years. And now, if they want the latest new car, they have to go electric as well. I think it will be a mix of conquest and loyalty. But in both cases, our objective is the same: to convert drivers from petrol to electric.