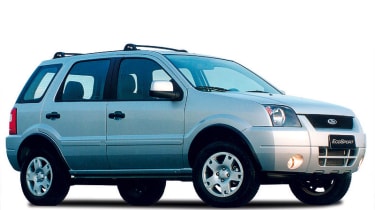 Did Ford miss a trick when it launched the Fusion? When the car appeared in 2002, the mini off-roader market didn't exist. But rather than start a trend, the firm held back. Other companies are doing well in this sector, and the EcoSport proves demand for such vehicles goes beyond Europe.

Small cars with off-road looks are big business at the moment. First came the Rover Street-wise, with its chunky bumpers and wheelarch extensions. Love it or loathe it, it set a precedent across the European motor industry. Citroen was next with the C3 XTR, then VW joined the party with the Polo Dune. Later this year, the Fiat Panda 4x4 arrives.

All of which makes Ford's decision not to sell the EcoSport in Europe a mystifying one. The Fusion-based mini-SUV was launched last year and is doing well in South America, especially with younger buyers. Next year, it hits Canada and the US, and rumours are rife a UK version is on the way.

We took to Brazilian roads - in an exclusive first drive of the best-selling version - to find out if it has what it takes to sell here in Britain.

It certainly looks the part. Although based on the Fusion, sharing its engine, transmission and suspension, the EcoSport's taller ride height gives it a more rugged look. The styling is based on that of the American Ford Escape, and features wider, rounder front lights and a spare wheel on the tailgate. Chunky plastic cladding protects the doors and wheelarches.

Inside, the cabin is nearly identical to that of the Fusion, with well placed controls and an excellent driving position. But right-hand-drive cars would probably have the same problem as both the Fusion and Fiesta - there's nowhere to rest your clutch foot.

The dash is unique to the model, though, and is its most disappointing aspect with simply too much rigid plastic and rough materials. Take to the road and the first thing that you notice is the EcoSport's impressive visibility - its height and large glass areas combine to provide an excellent all-round view. And despite its SUV looks, the Ford handles much like a conventional urban car - the steering is light, the gearshift slick and it's simple to park.

Out of town, the vehicle's loftiness creates a problem - because the 'on-roader' is fairly lightweight, it is buffeted by side winds, while the 1.6-litre unit sounds strained at high speeds.

The EcoSport is serious about its off-road intentions, too. The 1.6 front-wheel-drive model copes well with the rough stuff thanks to its supple suspension. And proving it believes in the car's ability, Ford has also launched a 2.0-litre 4x4 version with 148bhp, with the engine and transmission from the Mazda Tribute. Given the EcoSport's obvious appeal, and the fact it's a well equipped and attractive package, surely a UK equivalent can't be far behind?