We test the Ford EcoSport 1.5 TDCI, set to rival the likes of the Nissan Juke and Renault Captur 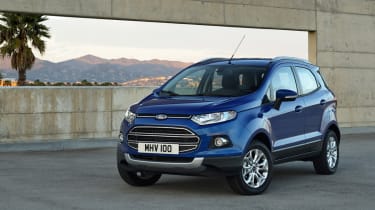 The Ford EcoSport may be the best-driving small SUV, but that’s not enough these days – it’s brilliant in parts, really disappointing in others. The indifferent interior quality and the difficult to live with rear door are too much to ignore, making the car feel like a global off-the-shelf solution rather than a cleverly thought-out bespoke product.

Ford has a habit of turning up late to parties. The SUV sales surge was in full swing when the original Kuga arrived in town back in 2008, its bigger brother the Edge doesn’t arrive until 2015 and now the little Ford EcoSport is here, just as the segment-leading Nissan Juke is about to get its mid-life revamp.

It gives Ford one clear advantage, though - the benefit of hindsight. So this new model, sitting on the acclaimed B-segment platform that also underpins the brilliant Fiesta, has a great opportunity to go straight to the top of the class.

The EcoSport – pronounced ‘Echo-Sport’ in deference to its creators in Ford’s Brazilian HQ – may have been developed across the other side of the world, but according to the Brit that led the team, Nick Collins, it has benefitted from Ford’s worldwide resources. This is another example of Ford’s global ‘One Ford’ philosophy.

UK-bound EcoSports are built in Chenai in India and arrive in the UK early next year. It’s certainly not the cheapest baby SUV on the blocks, with prices starting at £14,995 – £2,000 more than the cheapest Nissan Juke, Peugeot 2008 and Renault Captur.

But Ford isn’t beating around the bush – 40 per cent of Ford customers go for high-spec Titanium trim, so that’s where the range starts and that’s what we’re driving, with the 90bhp 1.5-litre TDCI engine under the bonnet. It’ll retail at a fairly sizeable £16,495.

From the front, the EcoSport is reasonably attractive and bang on brand, looking like the lovechild of a Kuga and Fiesta. Inside, it’s all Fiesta, too, using dash parts from Ford’s supermini star.

However, the EcoSport’s global roots are highlighted at the back end where there sits a monstrous carbuncle of a spare wheel on the boot door. It completely spoils the side and rear view, making the car look rear heavy. And while we’re on it, that rear door is side hinged and huge. It swings open wide from right to left (not the most convenient if you park, as we do, kerbside left) so you have to stand well back and watch for passing traffic if you’re parked nose in. If you’ve reversed into a bay, you might as well load through the side rear doors.

At the very least, Ford should fit a can of tyre sealant and ditch the ugly spare wheel, making it a no cost option. But that, we’re told, would be too expensive to re-engineer. Global car, indeed – not a good start.

Still, it’s a Ford and so it’ll drive well. And it does. The tall stance means there’ll always be a degree of body lean, but the car has been tweaked for European tastes with more reactive steering and a sportier feel. Of course, it’s not Fiesta sharp, but in a class where driver involvement has largely been forgotten, this is the baby SUV that’ll most likely put a smile on your face.

The steering reacts swiftly, if not sharply, in your hands, while the nicely judged ride quality has a firm undertone, but felt generally comfortable over the Spanish roads of our test drive.

We had a brief spin in an EcoSport with the award-winning 1.0-litre EcoBoost engine, but felt that this diesel was the better bet – it felt more comfortable on the road, more responsive in gear and felt better balanced. The diesel’s refined at a cruise and not too noisy when you put your foot down, too.

Entry-level cars get a cheaper, slower 1.5-litre petrol engine (that can be had with an auto box) than the 1.0 EcoBoost, but for us the diesel is top of the class. Especially as none of the models are especially fuel efficient, with the diesel providing a reasonable average of 61.4mpg and acceptable CO2 output of 120g/km. The 1.0-litre car claims 53.3mpg and 125g/km of CO2.

Swing open the EcoSport’s front door and you’ll be struck by how much space is inside a Fiesta-based car. Whether in the front or back, nobody will struggle for head or legroom. We managed to sit a six-foot passenger behind a six-foot driver in complete comfort with room to spare.

Width is more of an issue, but that’s to be expected. It’s just that with so much headroom, you’ll notice how close your passenger is to you when you’re driving. Also an issue is getting into the back – the door aperture is narrow, the step in quite deep and the rear doors could do with opening a tad wider. It might prove a bit tricky loading a young child into a child seat in the back.

At least that rear door makes loading stuff into the boot easy and there’s a decent amount of space, even if the 333 litres is mostly as a result of the height rather than depth or width.

As well as upgrading the suspension, Ford’s European team has also worked on some of the cabin materials, so the comfy seats are tastefully trimmed. The dash looks okay, too, but the plastics aren’t especially touch friendly – they feel hard and a bit cheap, while the Fiesta’s button-strewn infotainment system will remain a constant challenge for owners. A Peugeot 2008’s interior is much posher.

The driving position is good, though, with lots of adjustment although chunky front pillars can hinder forward visibility. Things are much better looking backwards, though.

As is the norm with Ford and especially as all EcoSports will be either Titanium or Titanium X trim levels, the tech and kit count is strong. As well as alloys, climate control and keyless go, you get Ford’s useful Sync with AppLink system that not only links your smartphone via Bluetooth, but lets you control your smartphone apps, too.