The Ford Kuga Vignale is the glamorous range-topper in the SUV's range, but it's just too expensive to recommend 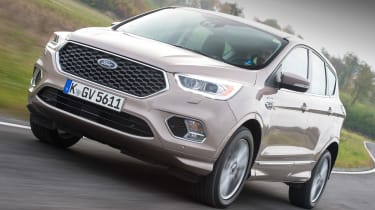 The Ford Kuga Vignale is simply far too expensive to recommend, while this engine and gearbox combination doesn’t suit the car at all. The new Peugeot 3008 has a plusher interior at a much lower price, and the SEAT Ateca is better to drive. Worst of all, the Kuga Vignale will depreciate so much you’ll be losing around £20 a day just by owning it - and that means the finance deals aren’t likely to offer good value either.

The Ford Kuga has recently been facelifted, bringing a new look and some new tech to the small SUV - and the round of updates also means there’s a new Vignale version at the top of the range.

Ford positions it almost as a separate brand, with a Vignale badge on the back of the car and a dedicated area in dealerships – but in reality the Vignale is just the top-spec trim, offering some extra kit at an inflated price.

The Kuga Vignale we tried was a 1.5-litre petrol auto, and it costs about £3,200 more than a high-spec Titanium X version. For that, you get the Vignale styling with a hexagonal grille design, Vignale badging and 19-inch chrome alloy wheels. 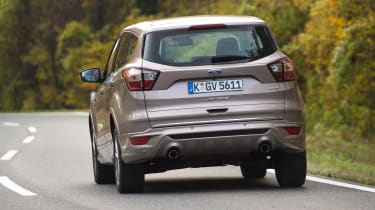 Inside, the Vignale adds hexagonal-patterned leather seats, a new trim colour and some special stitching on the dash. There’s extra standard kit as well, but in truth you’d struggle to spot the differences over the already well-specced Kuga Titanium.

Jumping into the Vignale after spending a day in a standard Kuga, we were struck by just how little seems to have changed inside, with much of the same trim being carried over. The seats are plusher, but not noticeably more comfortable even when driving around all day.

You do get a special concierge service at your Ford dealer, though, where a member of staff will take care of your car for you. It’s one of the selling points of Vignale, but hardly seems worth the huge price premium. 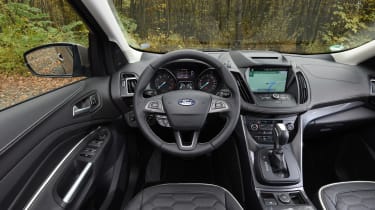 Of course, there’s loads of equipment on board, including perpendicular hands-free parking, weather-dependent lighting and an automatic electric tailgate. Most of the kit you’d really want, though, such as sat-nav, climate control and alloy wheels are already fitted to mid-range models like the Titanium.

Although the 406-litre boot is unchanged from the standard car, the larger seats mean the load bay doesn’t go completely flat, so the total 1,603-litre space is less useable. It’s still a practical car, and rear-seat passengers have about the same amount of space, too.

The Kuga Vignale retains the well-weighted steering and grip of the standard Kuga, but our car was fitted with an undesirable petrol engine and automatic gearbox combination, which doesn’t suit the car at all. 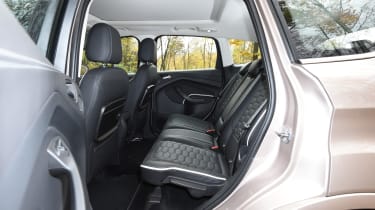 The 1.5-litre EcoBoost engine has to be worked hard to make progress, and sounds strained and harsh while doing so. The gearbox doesn’t rely on the sizeable torque curve either, instantly changing down and flaring the revs with any extra pressure on the throttle. It’s not particularly smooth when you’re driving around town either, faring best at a relaxed motorway cruise.

If you still like the idea of a Kuga Vignale, we’d recommend a diesel model with a manual gearbox. This setup offers more torque, better fuel economy and smoother shifts. Plus, you can have that as a front-wheel drive model, which should prove cheaper to run. This petrol version will return just 38.2mpg, whereas the 2.0-litre diesel in manages a much-improved 60.1mpg.