The Ford Ranger pick-up gets a bigger engine and increased torque, but is it necessary? 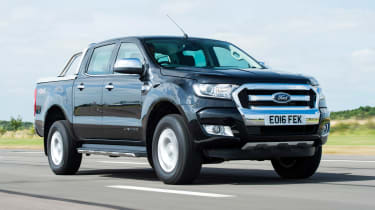 In such a competitive market, the updated Ford Ranger struggles to keep pace with accomplished rivals. This range-topping five-cylinder offers bags of grunt, but the smaller 2.2 will tow just as much – bringing our car’s near-£1,000 premium into question. The van-like interior can’t match the likes of Toyota’s new Hilux, while a Mitsubishi L200 is more car-like to drive. Equipment is generous, though, and the Ranger remains a hugely capable off-roader.

In just over 12 months, the European market has seen no fewer than six new or updated pick-up trucks arrive. There’s been a fresh Mitsubishi L200, and revised versions of the Nissan Navara and Toyota Hilux, while even Fiat has had a crack of the whip with its double-cab Fullback.

However, while those new models have been rebuilt from the ground up, Ford’s dependable Ranger has had to make do with a mid-life facelift. The changes for 2016 include a new front end, updated cabin and tweaks under the skin to boost efficiency.

We drove the new Ranger in Europe earlier this year, and praised the entry-level 2.2-litre TDCi diesel for its big load-carrying potential, off-road ability and tech-laden interior. But what it offered in those areas, it lacked in refinement and fuel economy. 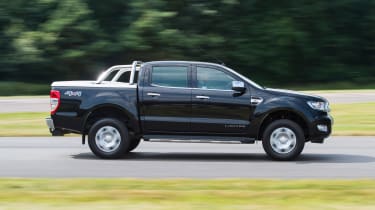 So how does the more powerful five-cylinder model compare? Can the bigger 3.2-litre engine offer more car-like driving manners and improved comfort? We’ve taken it on (and off) road to find out.

On start up, there’s little to tell the two Ranger models apart. The automatic gearbox suits the Ranger perfectly, and makes navigating the giant 5,362mm-long body slightly easier through tight city streets. But that’s not where this truck is designed to live. It’s on farms, building sites and rural roads where this truck needs to perform.

On the open road, the superior 197bhp and 470Nm of torque (versus 158bhp and 385Nm for the 2.2 TDCi) are immediately obvious. The 3.2-litre five-cylinder engine pulls strongly from a standstill, and actually feels pleasingly fast in a straight line. 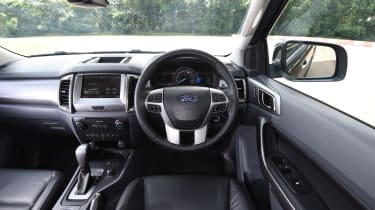 You’d think the larger engine would offer a greater towing limit, but both, depending on spec, can pull a 3.5-tonne braked trailer.

Fuel economy isn’t much worse, either, as the 3.2 claims 31.7mpg compared with the four-cylinder’s 35.3mpg. All this begs the question: who is this more powerful model for? Yes, it’ll probably tow more easily and the enriched performance makes for a more relaxed drive, but we’d argue whether either will prove necessary for your average pick-up buyer.

Both models have a tendency to pitch and roll in bends, while the light steering offers little in the way of feedback. The soft set-up can cause it to fidget on broken roads, forcing a more leisurely driving style.

It does remain hugely capable off-road, with the low-range setting allowing it to climb loose rocks no problem. 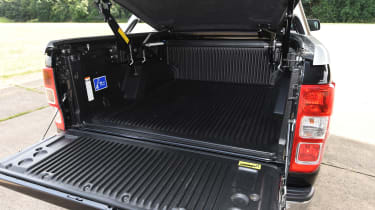 This Ranger follows the cheaper car in terms of fit, finish and equipment. Our mid-spec Limited model gets 17-inch alloys, chrome rear bumpers and power-folding door mirrors. Rear parking sensors, a heated windscreen and front mudflaps are also included, but the tonneau cover on our car was a pricey £1,440 option.

Inside, you’ll find Ford’s SYNC2 touchscreen, dual-zone climate control and an electrically adjustable driver’s seat. Auto lights and a cooled box in the centre console are standard, too. Yet the cheap plastics and Transit-like interior continue to disappoint – a pill made harder to swallow when you consider our test car tipped the pricing scales at just over £36,000.