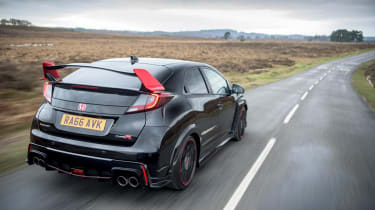 If you thought the Type R didn’t stand out enough already then this is the version for you. The Black Edition adds a bit more visual drama, but keeps the Honda’s wild but entertaining character. An all-new and more powerful Type R will launch at the end of the year, but that won’t stop all 100 Black Editions being snapped up.

This Honda Civic Type R is still a relative newbie to the hot hatch game having launched in 2015, but already production is coming to an end at Honda’s facility in Swindon. To mark the occasion the last 100 examples to roll off the line have been given some extra TLC.

Called the Honda Civic Type R Black Edition, this model is marked out, strangely, by red detailing on the rear wing and red decorative flourishes in the cabin. It’s priced at £32,300 so costs no more than a top-spec GT model, but unfortunately the extra red paint doesn’t add any extra horsepower – not that the fastest Civic needed any. 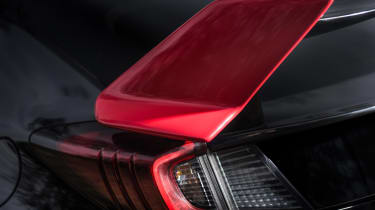 Under the bonnet sits the same 2.0-litre four-cylinder turbo churning out 306bhp and 400Nm of torque. Get off the line without any wheel spin (good luck) and it’ll hit 0-62mph in 5.7 seconds. Find a speed limit-free stretch of tarmac long enough and it’ll hit 167mph, too. What also remains is one of the best manual gearboxes in the business, the sweet-shifting six-speed transmission.

With the exception of upping the car’s rarity and potentially residual value when you come to sell it on, the Black Edition does nothing to alter the way the Type R drives. The result remains a frantic, raucous but ultimately entertaining experience.

The Type R’s 2.0-litre turbo is basically dormant below 3,000rpm, but push past that figure and the revs surge erratically while the front tyres scamper over the tarmac in an attempt to put down all of that power. As the speed climbs so does the noise, but you rather wish it didn’t. Where an Audi S3 or Mercedes-AMG A45 sing and burble their way to the red line, the Honda drones. Hopefully the aural experience is something that Honda will address with the new model later on the year.

Get to a corner and things improve. Bite from the front axle is huge meaning you can really lean on it and carry a lot of speed through bends. Body roll is virtually non-existent so tight and technical corners don’t upset the Type R’s composure at high speeds. Across a winding B-road there aren’t many other hot hatches that would keep up with the Type R.

The ride is on the firm side, especially around town where it tends to sniff out every pothole causing those inside to crash around rather uncomfortably. The infotainment system remains second-rate with cheap graphics and nav display, but for a 306bhp hot hatch its exceedingly practical with a huge boot and generous rear passenger space.