What's the all-new Honda Civic Type R like to drive? We find out as we get behind the wheel of the 316bhp hot hatch in Japan

The beauty of a great hot hatch is its dual personality. The ability to comfortably do humdrum day to day stuff but deliver a completely addictive drive when the mood takes you, is incredibly important in this sector of the market. The new Civic Type R now ticks both those boxes and feels far more grown up than its looks would suggest. Honda has addressed the Type R’s biggest flaws by making it more comfortable, refined and easier to live with while still providing access to its wild and rapid character when you want it.

We didn’t have to wait long for a new Civic Type R. The previous model was on sale for only two years before it was pushed into early retirement, but Honda is promising dramatic improvements across the board with the latest model. A brief taste in Japan last week showed real promise and now we have the keys in Europe to see what it’s really made of.

Honda isn’t doing it by half measures either, already the Type R has reclaimed its crown as the as the fastest front-wheel drive production car to lap the Nurburgring – knocking the lightened Volkswagen Golf Clubsport S off the top spot back in April.

Other than its gaudy appearance, the new Type R bares little resemblance to the model it is about to replace. Rather than list the multitude of changes, it’s easier to tell you what hasn’t been tweaked. The braking system, gearbox and engine are the only carry over parts from the previous Type R, but even those have been fine tuned for feistier performance. 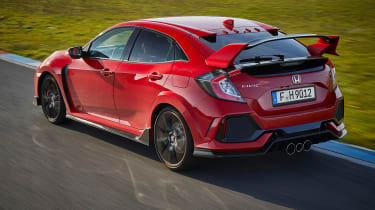 The brakes are bigger than before, the gearing has been lengthened slightly while the engine now pumps out 316bhp – a 10bhp increase. Incredibly, Honda now says the Type R will hit 169mph flat out, but oddly claims a slower 0-62mph time of 5.8 seconds, one tenth down over the previous model. But those are some serious numbers for something wearing a Civic badge on the boot.

Another change worth noting is that the Type R is now 37 per cent stiffer than before. That’s down to the new platform and the fact that the Type R was developed alongside the standard hatchback from the very beginning rather than simply being a Civic with a body kit and a power boost. However, the idea of a stiffer Type R is a little alarming, because that’s one thing the new model didn’t need to be.

It’s quite a surprise, then, that the first overriding impression you get from behind the wheel is how comfortable it is. It’s not as cossetting as a Mercedes S-Class, of course, but even within the first 200 yards you can tell the latest Type R feels like a completely different car. 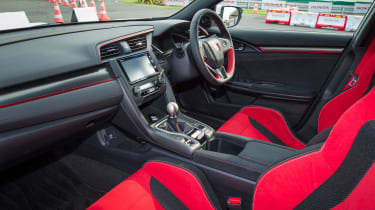 Bumps, compressions and uneven surfaces are dealt with and absorbed little fuss. Take the previous Type R over similar surfaces and you’d come out less bruised after 12 rounds with boxing world heavyweight champ Anthony Joshua. What has contributed enormously to the Type R’s new found level of comfort is the fresh chassis, multi-link rear suspension and adaptive dampers, which featuring a comfort mode for the first time.

At low speed, vibrations through the seats, gearlever and steering wheel have all but been eradicated, while the overall ride quality is far more cushioned and supple – even on standard 20-inch alloy wheels. At cruising speed everything about the Type R feels calmer, too, with less engine noise and more controlled body movements, meaning long motorway slogs are no longer an arduous task. Adaptive cruise control also helps elevate some of the strain.

The seating position is much lower, which gives you the sensation of sitting in the car rather being perched on it. The seats themselves remain a standout feature, and are supportive but comfortable. The dash no longer looks like an afterthought and features a much slicker-looking infotainment system, although the graphics and screen resolution are still a little low rent. The new digital instrument cluster is no longer obstructed by the steering wheel (which itself is also new), while perceived quality has also taken a leap forward with improved fit and finish and softer plastics in the majority of immediate contact points. Some scratchy plastics remain, particularly on the centre console, but on the whole it’s a big improvement if not quite up to VW standards. 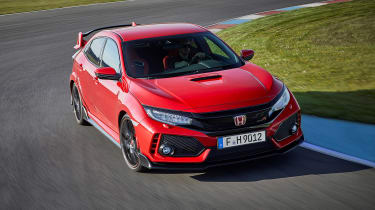 Thankfully, the Type R’s more mature nature hasn’t come at the expense of engagement or excitement. Flick the adaptive dampers into Sport or R+ mode and the engine, throttle response and ride sharpen. A mechanical limited slip front differential and wider track means the Type R serves up huge amounts of grip through tight, sweeping corners – you can feel the front end biting into the tarmac through the steering. The amount of traction the Type R generates feels almost unbreakable.

Although still not the most tuneful engine, a new three-exit exhaust system provides a raspier top end when you extend the engine out to 7,000rpm. It will even do the occasional crackle and pop on the overrun – but nothing as offensive as the Focus RS, thankfully.

Some turbo lag remains, with engine only getting into its stride around 2,500rpm. But compare that to the old model which felt dormant below 3,500rpm and it’s an undoubtedly more sophisticated powertrain. Power delivery to front wheels is equally rapid but much smoother; Honda’s claim of 5.8 seconds from 0-62mph feels conservative.

The six-speed manual gearbox (an auto isn’t even an option) remains one of the most satisfying in the business; its slick, weighty and precise throw is simply perfect. However, hardcore enthusiasts may be displeased to hear a new automatic rev-matching system has been fitted. It can be deactivated through the sub-menus but works incredibly well. It makes every change precise and accurate at high speed, while adding refinement at lower speeds.

And when it comes to simply being a hatchback, the Type R is up there with the best. It’s enormously practical, with a 420-litre boot, space for two adults in the rear and a supple ride, which means using it everyday is entirely conceivable prospect. That’s not something you could say of the old model.