Can Japanese rival finally steal Toyota Prius’s hybrid crown? We hit the road in newcomer to reveal all. 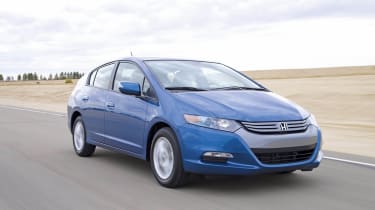 With a fuel-efficient hybrid powertrain, smart looks and a fun and useful guide to saving fuel, the 2009 Honda Insight may be the first hybrid to give the Toyota Prius a real run for its money. Excellent ecological credentials and a large interior combine with a price significantly lower than the Toyota’s, plus entertaining driving dynamics, to finally provide earth-loving types with an alternative – especially if they’re on a budget.

Think ‘hybrid’ and the chances are one car comes to mind. The Toyota Prius has such a hold on this fledgling class that it’s impossible not to picture its teardrop-shaped bodywork.

But rival Honda is about to strike back with a model of its own. Enter the 2009 Insight – a car that is being billed as the most affordable hybrid in the world thanks to an estimated Prius-beating price tag of less than £15,000.

The Insight bears a striking resemblance to the Prius, but Honda is promising it is more than just a copy of the Toyota, with a unique personality.

It’s smaller than the Prius and claims to offer a more dynamic driving experience. It also gives owners a fun way to monitor economy.

The newcomer uses Honda’s clever Integrated Motor Assist drivetrain. This couples an 88bhp, 1.3-litre eight-valve VTEC petrol engine with a 13bhp electric motor, which is sandwiched between the main unit and the CVT gearbox.

The combined output is 98bhp and 167Nm of torque – all of which is available from as little as 1,000rpm. So the Insight has plenty of performance. Throw in firm suspension, nicely weighted steering and a paddleshift gear selector on EX models, and you have the first fun to drive petrol electric car – at least in comparison to its main rival.

Of course, hybrids also have to be efficient, and the Insight encourages thrifty driving. An Eco Assist display takes pride of place in the centre console. It has the feel of a video game, and sees leaves and petals grow on flowers the more efficiently you drive. A more conventional bar graph also shows energy consumption. In addition, there is the Eco Guide, which uses backlighting on the speedometer to indicate how environmentally friendly you’re being. A green speedo means you’re loving the planet.

An Econ mode makes green driving easier by remapping the throttle to be less aggressive, dialling back air-con demand and using a few other tricks.

On a fuel economy route set up especially by Honda for our drive, we first ignored the car’s promptings and left Econ off. Yet we still managed 42.4mpg.

When we let the Insight tell us how to drive and coasted down a few hills, that figure shot up to 65.6mpg. Even without the hybrid technology, the Insight is a great family car. It has more legroom than the Jazz and having the compact battery mounted under the rear seats gives it more boot space than the larger Toyota.

Up front, the split instrument pod from the Civic family hatch is mated to audio controls from the Jazz. The plastics all have a high-quality feel, too.

On the outside, the Insight effortlessly blends the nose of Honda’s FCX Clarity to a Prius-like body. The aerodynamics make for quiet cruising… until you open up the throttle and the engine drones to the red line thanks to the CVT. Options include a sat-nav system, iPod integration and Bluetooth.

Overall, the Insight is a compelling package that opens up the hybrid market to buyers who previously couldn’t afford to shop there. When it goes on sale later this year, it will finally give the Prius some competition.

Rival: Toyota Prius While the new Prius is expensive, it’s more advanced than the Insight. Budget buyers will be pleased to hear Toyota’s announcement that the original will continue to be sold alongside it for less.