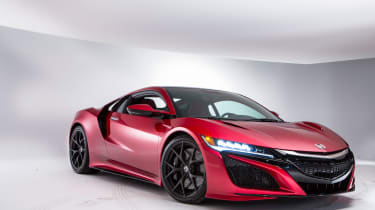 The production-ready Honda NSX was revealed at the Detroit Auto Show in January 2015. More than 18 months later and we're still waiting for the car to arrive in the UK – though bosses have now released preliminary pricing, ahead of the car's full launch in the autumn.

Honda has now confirmed that its new hybrid-powered NSX will cost "approximately £130,000". That puts it right into the firing line of German rivals like the Audi R8 and Porsche 911 Turbo, but around £30k more than the petrol-electric BMW i8.

First customer deliveries of the 550bhp hybrid will begin across Europe in September, but it's available to order now. We briefly sampled it last year ahead of a full launch later in 2016.

The original Honda NSX was revealed at the Chicago Motor Show in 1989. Developed with the help of late Formula One legend Ayrton Senna, the car enjoyed a 15-year-plus production run – but with the facelifted model discontinued in 2005, it’s been a while since Honda had a machine to challenge the likes of Porsche and Ferrari.

In 2007, the company confirmed a new V10 supercar was being considered. But then the recession hit and the brand backtracked, announcing that all plans for a new NSX had been cancelled. Now, though, 10 years since the previous model last rolled off the production line, Honda has launched a new NSX. 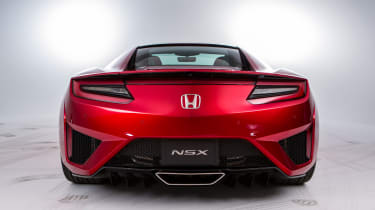 Project leader Ted Klaus said: "What (original NSX large project leader) Uehara-san and his team did 25 years ago made a statement about what a Honda sports car is and should be.

"The chance to reflect on that original philosophy and experiment further using our 21st century technology was a unique opportunity.”

The decision to go hybrid was a simple one according to Klaus, with bosses wanting the new car to be as revolutionary as the original.

"The values of the original NSX guided us throughout the project," he said. "But, like the first NSX, we wanted to take it one step further. The power unit we have used gives the driver instant response, particularly in those first few milliseconds after the driver has made any input – whether that be acceleration, braking or turning."

We've had our first drive in the new Honda NSX. Read the verdict here...

Looking like a cross between an Audi R8 and McLaren 650S with its aluminium composite and steel body, the bold new NSX casts a striking profile. The low roofline and gaping side vents give it an undeniably aggressive look, with dazzling LED headlights and a pair of sharp blades on the bumpers. It pushes the boundaries of Honda’s previously conservative design language.

At the rear, there are no hints of the eco-friendly hybrid powertrain. There are four central exhausts, LED lights and a race-inspired diffuser. It’s noticeably wider than you might think, too, with huge 295-section rear tyres giving the car substantial but necessary contact with the tarmac. Suffice to say, in the metal, few cars can match it for road presence. 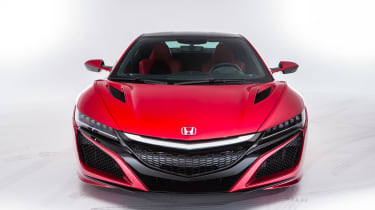 Every element of the NSX’s exterior design has been carefully sculpted for high-speed stability. It’s undergone extensive wind-tunnel testing at Honda’s development centre in Ohio, leading to modifications to the bonnet vents, side air intakes and boot spoiler.

Customers will have plenty of choice with their NSX - eight exterior colours and four interior colours will combine with a choice of three seat fabrics.

In keeping with the legacy of the original – dubbed the world’s first all-aluminium supercar – the new NSX features world-first material applications and construction processes. It uses a space-frame design constructed of aluminium, ultra-high-strength steel and other “advanced materials”. It gets a carbon fibre floor, too, to help make it ultra-rigid and even better to drive. 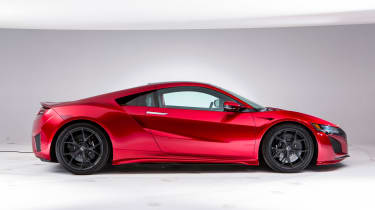 The design’s been optimised to concentrate the weight low and towards the middle, and Honda claims the car has the lowest centre of gravity in its class. Mike Accavitti, senior vice president of Honda’s upmarket US arm Acura, told us: “The NSX delivers pinnacle supercar performance, with zero-delay acceleration and confidence-inspiring dynamics.”

Under the skin is a specially developed nine-speed dual-clutch gearbox, which Honda says delivers “synapse-quick gearchanges and rev-matching downshifts”. It’s paired with a longitudinally mounted direct-injection V6 petrol engine, boosted by a single electric motor driving the rear axle. At the front are two further electric motors, which can vary the amount of torque they apply individually to each wheel. Honda calls the configuration its Sport Hybrid all-wheel-drive system (SH-AWD), working in conjunction with Agile Handling Assist (AHA), which subtly applies the brakes to each wheel in order to enhance dynamic stability. 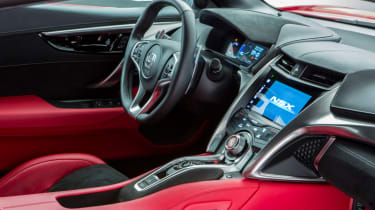 Inside it’s trimmed in bright red leather, with driver and passenger cocooned by the high centre console and intricate dash. The seats are firm but not uncomfortable, and the instrument cluster has an adaptable TFT display. The centre console houses the heating and climate controls, which sit neatly below the now-familiar central touchscreen.

However, the engine start button takes centre stage, nestled within the Integrated Dynamics System dial control, allowing the driver to choose between Quiet, Sport, Sport+ and Track driving modes. This allows for total reinvention of the NSX’s personality – for whisper-quiet early mornings or full-throttle circuit driving. The NSX also features a launch mode (which harnesses the V6 petrol engine and the electric motors) for lightning-fast standing starts. 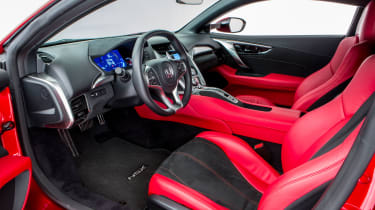 The original was praised for its usability, but this model is designed primarily to be a first-rate driver’s car. Lead designer Michelle Christensen said: “The new NSX was engineered to be an aggressive daily driver. We definitely adjusted things to make it suitable for daily use, but in the end it all goes back to the driver’s experience.”

Visibility is clearly not as much of a priority, although the thin A-pillars and generous approach angles should ensure the new NSX is still a car you can use every day. Engineers have highlighted the exposed mid-frame below the handcrafted leather dash panel as a nod to a ‘naked sports bike’ – one of the NSX’s primary design inspirations.

Ted Klaus, chief engineer and global project leader over NSX development, told Auto Express: “We’ve developed a human-centered supercar that responds to the will of the driver and builds upon the NSX heritage.”

The new car will be built exclusively at Honda’s Performance Manufacturing Centre in Ohio, where around 100 highly skilled “low-volume production specialists” will conduct full body construction, paint and final assembly. Badged as an Acura in the States, it’ll still be sold as a Honda in the UK. Prices will be around $150,000 (£100,000) in the US, but expect that to rise a little taking export taxes and VAT into account. First deliveries are pencilled in for spring 2016. 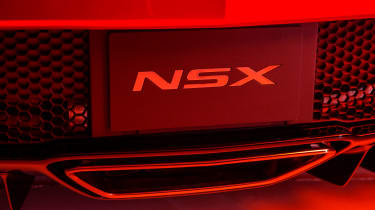 The future looks bright for Honda. With its new model line-up nearly up and running, an even hotter NSX Type R could also be in the pipeline. Ted Klaus said: “Everyone who loves cars wants to see a version that we say is pure red. The NSX has always been silver first, moving towards red later. Someone asked, ‘when will you be satisfied?’ Probably never. What you do today, you can improve on tomorrow.”

Auto Express caught up with NSX lead designer Michelle Christensen to talk all things styling, aerodynamics and whether it’ll be a future classic...

Q: The original car defined a new era for the supercar, and the new model has big boots to fill. What were the biggest challenges?

A: “The biggest challenge also became the biggest building blocks of the new NSX – which was keeping the purity of the original, and achieving an effortless synergy of man and machine. For the exterior design, for example, we tuned every surface to function with air flow and cooling, and deleted extra trim and garnishes that took away from the performance.” 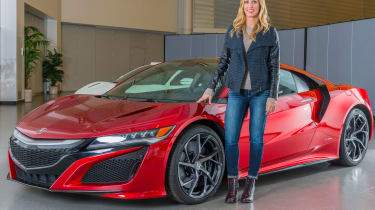 Q: Why did it take Honda 10 years to decide to build another NSX?

A: “It was more about deciding to keep pushing harder in order to achieve the best. With this car we felt like we produced something not only worthy of the NSX badge, but also a thrilling supercar worthy of the modern-day sports car enthusiast.”

Q: The first NSX was praised for being really easy to drive. Will the new one follow suit?

A: “The new NSX was engineered to be an aggressive daily driver, much like the first. For the exterior we definitely adjusted things to make it suitable for daily use, but it all goes back to the driver’s experience.” 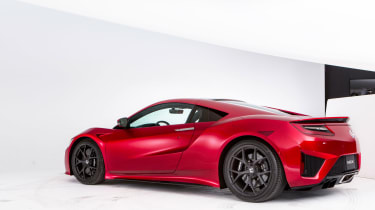 Q: What inspired you when first penning this new NSX? Have you looked closely at the old car – or did you want a ‘clean-sheet’ design?

A: “As our starting point, we inherited the 2012 show car’s design theme. We went back and resculpted every surface, primarily to add more sensuality in the surfaces, and second, for aero performance. We also were able to exaggerate key features such as the side intake to ensure that it became a more powerful, exotic statement, as well as the functional centrepiece.”

Q: There’s a big focus on downforce and high-speed stability. Are there elements you had to extensively change after wind-tunnel testing?

A: “Managing the total air flow around the car was a very synergistic process. After adding a front-end vent to cool the brakes, we noticed that led to building pressure in the wheel well. After some hypothesising, we created a slot in the front fender and tested again. Not only did it alleviate the pressure built up in the front fender well, but that very same air stuck to the body side as it travelled down the car and went straight into the side intakes.” 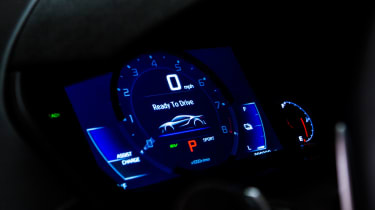 Q: How do you envisage the car ageing? Do you think it’ll look as classic as the original in 25 years’ time?

A: “When we took on the project in 2012 we made it our goal to enhance the performance through the design, which entailed distilling the styling down to only what needed to be there. I think that process of omitting unnecessary bits and pieces is what made the design a bit more pure, and will keep the NSX ageing well into other generations – like the original.”

Q: What elements of the new NSX will we see on future Honda models?

A “You’ll definitely start to see design cues from the new NSX in our future models. But, most importantly, developing the NSX in our studios has had a profound impact on the way we approach making cars, as well as rekindling the company’s love of sport and racing. So you can expect to see that soul in everything we do!”

How do you think the new Honda NSX will shape up against the Porsche 911 and Audi R8? Let us know in the comments section below... 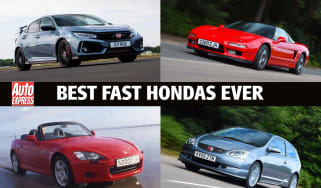 Honda has a heritage rich in performance but which are the best ever fast Honda cars? Our top 10 countdown rates the living legends