The Ioniq is all about efficiency, and Hyundai makes some big claims concerning the model's potential economy and efficiency figures. The manufacturer states that all versions of the standard hybrid are capable of nudging over 60mpg, with emissions between 102g/km and 105g/km of CO2, depending on the chosen equipment level.

For the plug-in hybrid, Hyundai claims a pure-EV range of around 39 miles, but you'll do well to get about two thirds of that total in real-world motoring. The official fuel economy figure of around 256mpg is pretty unrealistic, too, although with regular charging this could still be a very efficient commuter car - with it only taking around 2.25 hours for a full top-up using a home wallbox.

The full-electric Ioniq is now able to cover a maximum 193 miles on a single charge. With Hyundai moving from a 6.6kW on-board charger to a 7.2kW system, the time it takes to top up the battery to 100% (from a 7kW home wallbox) is now just over 6 hours. 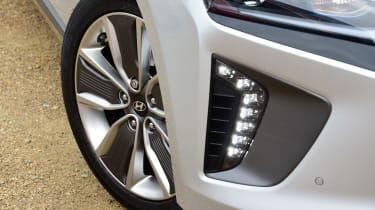 To help maximise efficiency Hyundai fitted an aluminium bonnet and boot, as well as lightweight suspension components, which saved around 25kg over conventional items.

When it comes to efficiency, every gram counts, so stripping mass out of a car boosts fuel economy and lowers CO2 emissions. However, the welcome benefit is that lighter cars also handle and perform better; while the Ioniq won’t set your pulse racing, the chassis is relatively capable.

Insurance premiums for the Hyundai Ioniq should be fairly affordable, with the entry-level SE Connect hybrid placed in group 11. The plug-in model in top Premium SE spec sits in group 12, while the full electric version in the same trim is a little higher at group 17.

After three years and 36,000 miles, the Ioniq is expected to keep around 46% of its original value. The standard hybrid models fare a little better than average at between 47-51%, with the full electric cars not holding on to their value quite as well with around 42% retained over the three year period.