Hybrid powertrain is refined and great around town, but noisy when pushed

To all intents and purposes, the hybrid and plug-in hybrid have the same powertrain – with a total of 139bhp from the four-cylinder petrol engine and electric motor – which means that both offer decent performance. The plug-in is slightly quicker, but the big difference is that this version has a bigger battery, which can be charged from the mains, bringing a big increase in its electric-only range and a big drop in its CO2 emissions.

In the regular hybrid, the Hyundai’s six-speed DCT auto does a decent job of making the most of the in-gear shove, too. Holding it in fifth and sixth is where the electric motor’s 170Nm of torque helps, because when the engine revs are low, the boost from the battery pack and motor ensures the Ioniq feels brisk enough in a straight line.

The petrol engine is always quick to cut in, even on a light throttle. Although Hyundai claims the car will hit 75mph on electric power alone, in reality it’s difficult to coax the Ioniq along at this speed without the petrol motor intervening. The torque fill from the hybrid system is more noticeable off the line, where the instant shove effortlessly gets the Ioniq’s 1,370kg body moving. 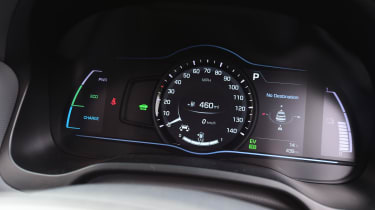 When the 1.6-litre unit does chime in, it’s relatively refined. But as in the Toyota Prius, if you ask for maximum performance, the noise from under the bonnet becomes more intrusive. The gearbox’s six ratios mean the Ioniq feels more like a conventional car to drive, and although it’s a dual-clutch unit, it doesn’t shift with the snappiness you might expect from such a transmission. It’s mostly smooth enough, although we did experience a few jerks and shunts from the gearbox around town in EV mode. At least the punchy EV performance means quick getaways are okay.

It’s relaxing to run around in EV mode, but the steering isn’t quite as nice as the Toyota’s because the weightier set-up feels more resistant to your inputs. The regenerative braking also isn’t quite as polished, with a little more jerkiness when stopping. Neither is perfect due to the lack of feel from the pedal.

You can run the plug-in Ioniq in a couple of modes, but most of the time will be spent in the hybrid setting, mixing electric and petrol power as it sees fit. It's worth noting, though, that the Ioniq PHEV is keener to stick with pure-electric motoring than the conventional hybrid. Despite this, you'll still notice the engine kicking in quite regularly – not least because it's not the most polished of transitions.

EV mode forces the car to ignore the petrol engine altogether for as long as possible. In theory, at least, this would allow you to complete the bulk of a longer journey using the petrol engine, and then switching to silent running in EV mode for the final few miles in an area where noise or emissions are more heavily controlled. In practice it works pretty well, although the 60bhp electric motor doesn't have the punchy shove that you'd get a in a pure-electric car.

The Hyundai doesn’t drive as sweetly as a Toyota Prius, though. Its ride is too firm, with the wheels springing back harshly over lumps and bumps; the Prius is smoother over the same surfaces. Also, the Ioniq isn’t as comfortable as its Japanese rival because the chassis feels more unsettled and nervous compared with the more forgiving Toyota. There’s also more road noise in the Ioniq.

There's a fair amount of body roll if you throw the car at a corner, but you'll find that a pretty unsatisfying exercise. That's because, while the steering is accurate enough, it is also desperately short on communicating what the wheels are doing. Tricky brake pedal modulation – perhaps the hardest part of a hybrid set-up to master – completes the picture, leaving you with a car that's comfortable to drive, but not in the least bit rewarding.

The Ioniq electric has received a bit of a refresh with a bigger 38.3kWh battery and an increase in range from 174 miles to a claimed 193 miles. Driving the Ioniq remains a fairly dull experience, and you’re never in any doubt that this is a vehicle designed for efficiency above all else.

The extra weight of the bigger battery in the revised all-electric model means that, despite an increase in power, the headline performance figures remain largely similar to before; 0-62mph takes 10.2 seconds (or 9.9 in Sport mode), although the 395Nm of instant torque means that the Ioniq is quick to respond as you pull away from traffic lights and out of junctions.

The plug-in hybrid model uses a 1.6-litre 4cyl petrol-electric powertrain with 139bhp. It increases the all-electric range over the standard hybrid with a bigger 8.9kWh battery pack, and improves efficiency in the process. When we tested the plug-in version, it accelerated from 0-60mph in 9.1 seconds, helped by the electric motor’s torque boost off the line. This instant shove from the electric motor meant the Ioniq’s in-gear figures were also strong, accelerating between 50-70mph in top gear in 13.2 seconds, showing the extra oomph delivered by the battery and motor set-up.