Sleek shape and neat tech both appeal, but iffy build quality lets it down

Designing a hybrid from a clean sheet of paper (as Hyundai has done) allows designers to put big emphasis on aerodynamic efficiency to extract the best possible fuel economy. There’s not much point in maximising mpg from the drivetrain if a slab-like body shape with lots of drag undoes your hard work.

This much is obvious from the Ioniq’s styling, as the curving roofline and some clever aerodynamic details give it a slippery shape.

A car’s drag coefficient relates to the resistance created moving through the air; this is what designers strive to minimise, and in the Ioniq’s case, it’s a low 0.24. Actually, this is the same as the figure for the Toyota Prius, so it’s no surprise that these cars bear a striking resemblance to one another. The Ioniq’s low nose, gentle roofline and high, square tail give a similar look in profile, while both models feature a bar across the back dividing the large glass hatches. 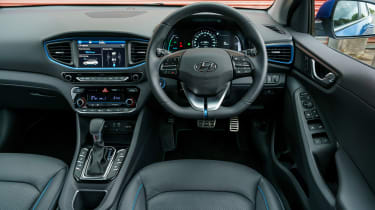 The C-shaped LED running lights make it easy to pick the car out on the move, while a hexagonal grille connects the two sleek light units. A contrasting colour insert at the base of the bumper gives scope to personalise  the car, with seven different colours to choose from.

At the rear, the bar that divides the boot lid also acts as a brow for the tail-lights and dark glass panel, while a glossy black plastic insert in the bumper breaks up the smooth surfaces at the back. Small 15-inch alloy wheels are standard, although optional 17-inch alloys are available.

Equipment levels are pretty good all round, with Premium SE models getting plenty of kit. Heated and ventilated leather seats are included, along with adaptive cruise control and automatic wipers.

The SE Connect hybrid models include an eight-inch colour touchscreen, while all other cars feature a 10.25-inch display with integrated sat-nav. There's higher-resolution graphics than you'll find in the on-board system of a Toyota Prius, and it’s also placed higher up on the dashboard and in your eye line, which makes it easier to use.

Where sat-nav is standard, the set-up tells you when to slow down to help boost economy, and Apple CarPlay and Android Auto are also included if you’d prefer to use guidance from your smartphone. You can keep it powered using the wireless charging function if your device supports this, too.

Like the Prius, there’s an energy flow monitor alongside an eco driving coach that gives tips to improve your driving and maximise efficiency. DAB and Bluetooth are standard across the range, although the entry SE Connect trim level doesn't include the the Infinity sound system, which features eight speakers, including a sub-woofer. 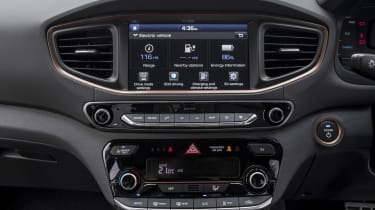 While there are no question marks over kit, there are a few over the build quality. The blue accents lift the sombre cabin, but some of the materials highlight the Ioniq’s cheaper price tag. The interior design is also more conventional than the Toyota’s, with the energy flow meter in the digital instrument cluster the only visual clue to the hybrid powertrain.