The Tucson offers a functional and clean exterior design, but the interior lacks flair 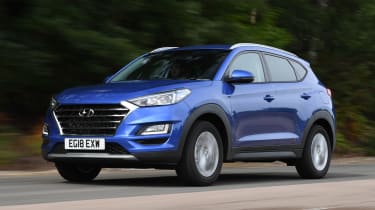 Hyundai styled the Tucson to look like the last-generation Santa Fe, so compared to the all-new version of that model (and the radical looking Kona) the mid-range Hyundai SUV looks a little conservative. This is particularly evident at the front, where the Tucson has a chrome bar grille that links up to headlights that sweep back onto the front wings.

Squared off wheel arches and a Z-shaped shoulder crease down the car’s flanks are designed to give the impression the Tucson is moving while it’s stationary. The rounded rear end is smart, while the rear light clusters have a similar look to some of Hyundai’s other models, such as the i20 supermini. The overall look is a far cry from the bulbous ix35 the Tucson replaced.

The N Line features its own sporty styling upgrades. The front gets i30 N Line-inspired ‘shark tooth’ elements flanking each edge of the front bumper. A honeycomb grille comes with a smoked metallic surround instead of the usual chrome, and there are a set of LED daytime running lights in a boomerang shape. The changes are rounded off with contrasting black finishes for the door mirrors, roof, rear spoiler (larger than on other Tucsons) and 19-inch wheels.

Easy to read dials, the extensive use of squidgy soft-touch plastics and a first-rate infotainment system are particular highlights, but despite these gains in quality, the interior has an air of blandness – the Nissan Qashqai and Renault Kadjar have dashboards that are more interesting to look at. 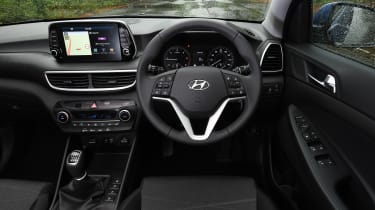 The cabin isn't very visually appealing, but the layout and design are functional. The dash is simple, but you can see where everything is so you don’t have to go poking around trying to work out how to adjust the air con or find your favourite radio station.

The touchscreen infotainment system is very bright and easy to navigate thanks to simple, ogical menus. However, it’s not quite as sharp as some rival systems graphically, and the screen, which isn’t able to recognise pinch and swiping motions on the mapping screen, can be slow to respond to touches.

Equipment levels are strong though: all Tucsons come with DAB radio, Bluetooth and air conditioning, while SE Nav models benefit from rear parking sensors, heated front seats and climate control. All cars get a touchscreen with Apple CarPlay and Android Auto as standard, while navigation is fitted to SE Nav models and above.