If you want a Jaguar F-Pace that prioritises luxury over sportiness, the Portfolio trim level is the one to get 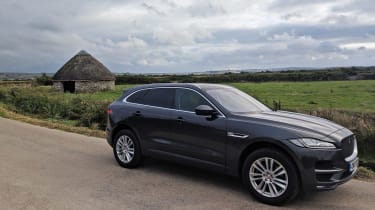 The Jaguar F-Pace is often seen at the sportier alternative to its SUV stablemates from Range Rover and Land Rover but in Portfolio trim it mixes those inherent dynamic qualities with a fair amount of comfort and luxury. Well built, spacious and sporting some classy design touches inside and out, the F-Pace package is enhanced by the Portfolio trim level, which offers a good haul of equipment as well as a boost to the quality of materials inside. The infotainment technology now leaves a bit to be desired in this rapidly evolving sector but generally the F-Pace remains as competitive today as it was at launch.

The Jaguar F-Pace is now part of the furniture in the premium SUV class having arrived in 2016 and picked up the Auto Express Car of the Year award in that debut year. Updated for the 2018 model year, it’s also established a solid niche for itself within the Jaguar  Land Rover stable where Land Rover and Range Rover aren’t exactly lacking in upmarket SUV options.

The F-Pace impresses with its dynamism and style - just as you’d want any car with a Jaguar badge to - offering a sleeker and more road-biased alternative to its Land Rover and Range Rover stablemates. Don’t assume, however, that the Jag SUV can’t do ‘comfortable’ as well as it does ‘sporty’.

The Jaguar F-Pace range effectively splits above the entry-level Prestige trim level with one branch extending in an increasingly performance focused direction through R-Sport, S and SVR derivatives, and the other progressing only as far as the Jaguar F-Pace Portfolio that we’re concerned with here. 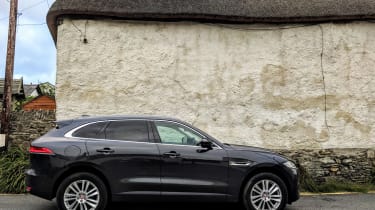 The Portfolio is the height of luxury as far as the F-Pace is concerned, majoring in enhanced materials, comfort features and technology where the R-Sport tags on sports seats and a bodykit. F-Pace Portfolio customers get a panoramic sunroof that adds to the light levels and refined ambience in a cabin featuring perforated Windsor leather seats with 10-way electric adjustment for the driver and front passenger. There’s also a heated front windscreen, keyless entry and xenon headlights with LED daytime running lights.

Outside, the Portfolio F-Paces are marked out visually by their standard 19” 7-spoke alloy wheels while chrome window surrounds and side vents are shared with the Prestige models. It’s subtle but the F-Pace remains one of the most attractively designed of the largish SUVs with a dynamic stance and flowing roof line topped off by a suitably imposing Jaguar front end with its slightly cowled headlights and prominent grille.

The inside is where the F-Pace Portfolio models separate themselves from the rest of the F-Pace line-up. As well as the aforementioned Windsor leather seating, there’s leatherette covering for the dash and centre console plus a choice of either etched aluminium or ebony veneer finishes. All models now get the 10” Touch Pro navigation and infotainment system. Its widescreen display dominates the dash and in the Portfolio it’s paired with the Meridian stereo upgrade that sounds great. The menu system is clear and logical, helped by the fact that the important climate and driving mode controls get their own separate buttons in the panels below. Some of the touchscreen icons are on the small side for using on the move, though, and Jaguar still can’t offer Apple CarPlay or Android Auto, pressing you to install its own InControl Apps to your phone for a more comprehensive hook-up that still never feels as slick as the big tech alternatives. It’s an area that puts the F-Pace at a noticeable disadvantage to rivals like the BMW X3 and Audi Q5.

Jaguar also fits a raft of active safety tech to the F-Pace as standard these days with more bundled into option packs. At £1,350 the Drive Pack with its Blind Spot Assist, adaptive cruise control that can bring the car to a complete stop and High-speed Emergency Braking is well worth considering. One caveat is that Jaguar’s collision warning system is one of the most sensitive we’ve encountered. It’ll sound an alarm when cars innocuously brake some distance in front of you and even get triggered by parked cars on the outside of bends. Still, better safe than sorry. 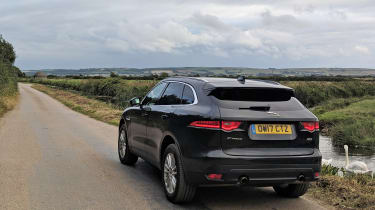 Practicality-wise the F-Pace is roomy enough for four adult passengers but the slim central seat and transmission tunes make a fifth full-size occupant inadvisable on long trips. Storage is very well thought out with a central bin with charging points that can accommodate larger smartphones and wide pockets in all four doors. The rear seats can recline which eats into boot space but there’s 650-litres available if those in the back can be persuaded to maintain the correct posture and there’s room under the flat floor to store the parcel shelf.

Jaguar F-Pace Portfolio buyers get the full suite of mainstream F-Pace engines to choose from, kicking off with the 2.0-litre 4-cylinder turbo petrols and diesels and topping out with the 3.0-litre twin-turbo V6. The entry-level 161bhp diesel is offered only in rear-wheel drive, manual guise and takes 9.6s to hit 60mph. It doesn’t really have the urge befitting a premium SUV of the F-Pace’s ilk but 50.4mpg is the best fuel economy you’ll find in the line-up. More satisfying is the automatic-only 178bhp version of that same diesel engine which is offered in RWD (8.1s and 49.6mpg) and 4x4 (8.4s and 47.9mpg) guises. Then comes the 238bhp version of this unit with a 6.8s sprint and 43.5mpg economy.

Topping the diesel range is the only 6-cylinder engine option you can get with an F-Pace in Portfolio trim - the 296bhp 3.0-litre V6. Here you get a 6.2s 0-60mph time and official combined economy of 43.5mpg plus a driving experience that’s nicely in tune with the Portfolio model’s luxury pretensions - largely thanks to the 700Nm torque output that’s a full 200Nm up on even the 238bhp 4-cylinder option. 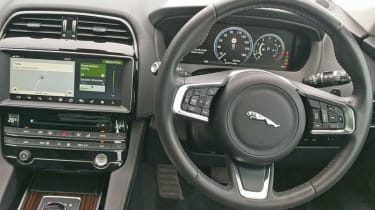 On the petrol side, it’s a pair of 2.0-litre turbos as the V6 unit is reserved for R-Sport and S models while only the SVR gets the 543bhp V8. Both offer decent performance with the 248bhp 25t option doing a 6.6s 0-60mph sprint and the 296bhp 30t one chipping in with a lively 5.8s. The throttle response from the lower powered unit could be more immediate but refinement is first class with both engine options almost inaudible at motorway speeds. Official fuel economy around 34mpg will be the major concern, especially as we could only manage 27mpg on our extended test drive of the 25t.

What it all means is that there should be something to suit most tastes within the F-Pace Portfolio range. There isn’t a bad engine in the line-up and there’s nothing serious to fear from the 4-cylinder units, despite what your preconceptions regarding a 2.0-litre engine in a biggish SUV might be. What you get across the board with the F-Pace is one of the best resolved SUVs in the class from a driving perspective. Porsche’s Macan might retain the title for ultimate sharpness but the Jaguar steers, turns and stops with a poise and fluency that remains rare in SUVs of its size.  Then, when the task at hand is cosseting its passengers, the Jaguar has a very good stab at that too, thanks to those low noise levels, the smooth shifting gearbox and suspension that obliterates the bumps while keeping the car’s weight transfers well in check.