Jaguar has given the F-Pace the Chequered Flag treatment, but is the extra kit worth the extra money? We find out... 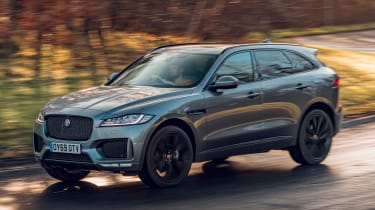 Every buyer wants maximum bang for their buck, and in the case of the Jaguar F-Pace Chequered Flag, the added kit offered and discounted price means that there’s plenty going for it. Despite the fact a facelifted car is due shortly, the F-Pace still competes with the best in the class thanks to its sharp styling, impressive practicality and brilliant handling.

The Jaguar F-Pace has long been one of our favourite mid-size SUVs. But, having been on sale for almost four years, a mid-life refresh is due soon to help it keep pace with rivals like the Audi Q5, BMW X3 and the Alfa Romeo Stelvio.

Until then however, Jaguar has pepped up the line-up with the new Chequered Flag trim level. It’s a spec we’ve seen previously on the XE and XF, while the smaller E-Pace has been released in a similar guise at the same time as its bigger SUV brother.

Taking the R Sport trim as a base, the F-Pace Chequered Flag gets a host of extra cosmetic and trim upgrades to set it apart from the rest of the range. From the outside, it’s most clearly distinguished from lesser models by the front bumper, which is lifted from the sporty F-Pace S, while the rest of the body kit is carried over from the R Sport. 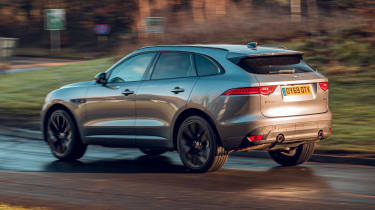 However, all the usual brightwork is deleted; the grille surround, side window trims, door claddings, roof rails, and side vents, which also feature an integrated and unique Chequered Flag badge, are all finished in gloss black. The standard 20-inch wheels – the model we tried came with 22-inch items – are finished in a similar hue. There are three paint finishes to choose from: Yulong White, Santorini Black and Eiger Grey.

Open the doors and you’re greeted with special treadplates on the sills, while the interior upholstery and roof lining are all finished in black. The only contrasts to the sporty (or gloomy, depending on your point of view) darkened look, are the bright silver stitching and the meshed aluminium trim panels.

Beyond the cosmetic, the standard kit list is boosted beyond the standard R Sport, too. A panoramic roof is standard, as is a heated steering wheel, a heated windscreen and electrically adjustable front seats. Jaguar upgraded the infotainment systems throughout the F-Pace line-up to include both Apple CarPlay and Android Auto, while the 10-inch touchscreen infotainment system and the 12.3-inch digital driver’s display are the fanciest available in the range. 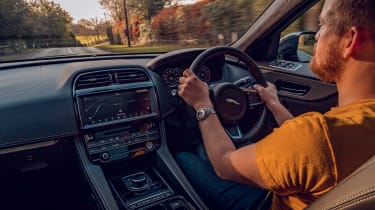 The system looks great and is fairly intuitive to use, but some of the on-screen shortcut keys are small and fiddly, making them difficult to use on the move. The digital driver’s display works well, though doesn’t quite have the range of customisation as Audi’s Virtual Cockpit. The Chequered Flag also adds an uprated (and wonderful) Meridian sound system, while a full-surround set-up costs £570 extra.

Beyond the standard kit list, our car was enhanced further by the addition of a 360-degree camera (£990), rear privacy glass (£395), and Adaptive LED headlights (£750). It does seem slightly stingy that auto high beam and electric lumbar support are extras though, costing £150 and £250 respectively.

Mechanically, nothing has changed compared with the rest of the F-Pace range. Buyers are offered the choice of one petrol and two diesel engines. The diesels are both four-cylinder units, producing 178bhp (D180) and 237bhp (D240), with the lesser version capable of up to 41.9mpg.

We tried the petrol version: another 2.0-litre unit, this time producing 247bhp and 365Nm of torque. It’s a lively unit that revs keenly, even if the noise it makes isn’t the most tuneful. Paired with an eight-speed automatic gearbox that can be a little slow to respond at times, it doesn’t quite feel lively enough for a car that, otherwise, is really brilliant to drive. 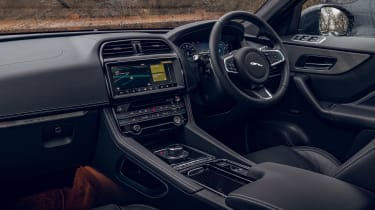 The way the F-Pace turns in, the way it grips, and the way it keeps its mass under control, are all deeply impressive. That it can do all this while delivering a pretty comfortable ride is why the F-Pace can still lay claim to offering one of the best sorted chassis in its segment. The steering is much heavier than in some rivals, giving the F-Pace a solid feeling when turning into a corner. However, it’s still light and wieldy enough to use when performing low speed manoeuvres.

Elsewhere it’s the same F-Pace it’s always been. That means interior space is easily on a par with other premium SUVs; both leg and headroom are generous enough. It’s better still in the boot, where the 650-litre load volume is pretty much class leading.

Prices for the Chequered Flag start from £46,995 for the D180 model, with the P250 petrol priced at £49,850. At that figure, the F-Pace represents pretty good value for money compared with the rest of the range. Jaguar says that the extra equipment over and above the R Sport is worth £5,810, but the price has only risen by £3,400.