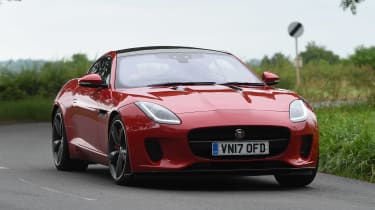 Jaguar’s F-Type sports car is about to get four-cylinder power to go along with its V6 and V8 engines - and Auto Express has been for a run in a late prototype of the car, driven by the firm’s top development driver Mike Cross.

The turbocharged four-cylinder motor is Jaguar’s latest Ingenium petrol unit and produces 296bhp and 400Nm of torque. It also takes 52kg off the F-Type’s overall kerbweight. On paper the performance figures are respectable rather than jaw-dropping; the 0-60mph dash takes 5.4 seconds, a few tenths of a second more than the (considerably cheaper) 2.0-litre Porsche 718 Cayman.

But fuel efficiency is greatly improved, offering a 16 per cent improvement over the existing V6 F-Type, Jaguar claims. That means the 2.0 (which is only available with an eight-speed auto gearbox) manages an official combined economy figure of 39.2mpg, and CO2 emissions of 163g/km. 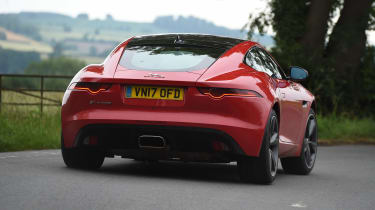 As Cross begins to showcase the entry-level F-Type’s potential on the roads near JLR’s HQ in Warwickshire, it’s clear that the engine’s shove is delivered in an impressively linear fashion. Indeed, as he revs it through to around 6,500rpm, it feels more like a normally aspirated motor instead of a turbocharged one.

The V6’s howl has gone, of course, but there’s a pleasing bark from the exhaust. When you punch the throttle the sound is artificially enhanced via acoustic engineering through the car’s speaker system, but the overall effect doesn’t sound fake, thankfully. Cross takes great delight in demonstrating how it gets even more shrill towards the redline, too.

“The thing I like about the 2.0,” Cross says, “is that it feels like a car you can still thrash on UK roads - even with our speed limits.” He’s not wrong; part of our route near the Fosse Way opens up and JLR’s star driver is able to exploit the car's potential. The F-Type certainly doesn’t feel slow, but we’re able to enjoy hard acceleration up to third gear – a point at which the speedometers on V6 or V8 models would have been well beyond three figures.

Best of all, the F-Type’s poise appears better than ever, as the car clips apexes with vigour. The ride is sweet on our car’s 19in rims, too. In fact, we’d stick with that size, based on a second, shorter passenger run in a car equipped with 20s.

Cross spends most of his drive in the car’s default mode instead of the racier ‘Dynamic’ configuration; that’s because the difference between the settings is slightly smaller here than it is in the V6 or V8 models. The 2.0-litre car doesn’t feature adaptive dampers, but flick the chequered-flag switch in the centre console and you get a more aggressive throttle response, keener steering and even more pops and crackles from the exhaust. 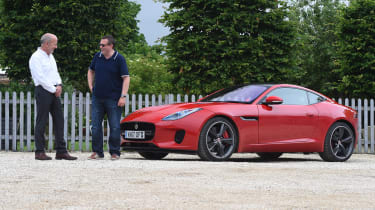 If anything, there’s a duality to the standard set-up that should make it suitable for 99 per cent of drivers. Around town, the four-pot stays relatively muted, with its active exhaust remaining hushed and altogether rather polite. But on the open road, the same system can become much more rowdy, just because of more aggression on the throttle pedal.

We’ll get to try the car for ourselves in a few weeks, but from this short passenger run, we can already detect the tempting prospect of the cheapest F-Type in the range actually being the best one for UK roads.