What does the 200mph Jaguar F-Type SVR feel and sound like blasting through a closed road tunnel in New York?

Jaguar Land Rover’s Special Vehicle Operations division has focused on the SUV brand so far, with high-performance versions of the Range Rover. Now it’s time for the first Jaguar to get the treatment - and we’ve had a short blast through a specially closed stretch of road in New York to experience how the F-Type SVR sounds.

Available as a coupe or a convertible, the F-Type SVR gets an updated version of the regular F-Type R’s 5.0-litre supercharged V8 petrol engine. There’s an extra 25bhp on tap, taking overall power output to 567bhp, along with 700Nm of torque. The SVR is available only with four-wheel drive - leaving a gap, we must suppose, for an even more hardcore rear-drive variant that could be in the pipeline - and an eight-speed automatic gearbox. 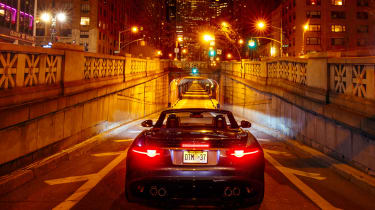 The performance figures are pretty staggering; this is now an F-Type that can hit 200mph (195mph if you choose the open-top), and crack the 0-60mph sprint in just 3.5 seconds (a gain of 0.4 seconds over the already potent R).

Throw in uprated suspension, revised steering, a bespoke aerodynamic diffuser and front splitter, and forged alloy wheels, and you end up with a heady, exclusive performance cocktail that Jaguar thinks is worth £110,000 in coupe form - a hefty £20k hike over the R. The convertible is even more pricey, incidentally, at £115,485.

There is one further tweak that you get for all that cash, though - and that’s the reason Jaguar has closed the Park Road Tunnel in New York for a few hours on the evening before the city’s motor show. The tunnel its 422 metres in length, running for five blocks; indeed, it is the same stretch of road that Land Rover closed a few years ago for Daniel Craig to drive the Range Rover Sport to its global reveal.

Jaguar has fitted extra lighting to the tunnel walls for dramatic effect - but it has stopped short of resurfacing the road, which is considerably more important. Daily use by portly American vehicles means the tunnel has a distinct crown, and as Jag’s own professional driver demonstrates the car in one direction, it’s already clear that the SVR’s four-wheel drive system is working hard to find traction. 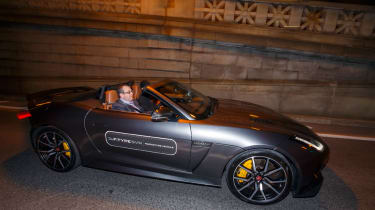 Then it’s our turn; Jag’s man performs a fairly tortuous three-point turn at the exit of the tunnel and points the car back in the direction we’ve just come from. I’ve been told to feed in the throttle as progressively as possible but even so, there’s enough grunt for kick-in-the-kidneys acceleration - and an immediate realisation that the car is going to pull me all over the tunnel road as it distributes the power as best it can.

Then there’s the noise; the Jag V8 already makes a sensational sound in the R, but the SVR’s tone is even more like that of a highly tuned NASCAR engine, with a purer, cleaner rasp to it. The gearshifts from the eight-speed auto are punchy and fast, and accompanied by a gutteral rasp. Halfway along I lift off, allowing me to confirm that those crackling pops from the exhaust overrun are still present, despite the switch from a single silencer on the R to a new twin-silencer set-up. 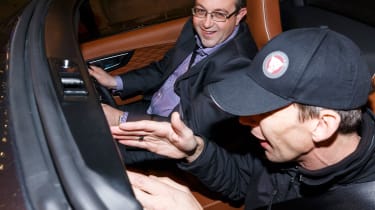 It is next to impossible, of course, to discern any real nuances in the SVR’s dynamic make-up in a few hundred metres of poor-quality tunnel road. I can tell you this much, though; it does feel more aggressive on throttle response than even the R - itself hardly a shrinking violet in that regard - and four-wheel drive or not, it will be an intense experience on all but the straightest and driest of routes.

Jaguar sources say they arranged the Park Avenue tunnel run to give us a teeny bit more insight into where there’s room for the SVR above the R. I see their point.