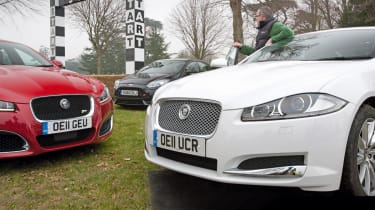 8
Our Jaguar XF has a showbiz lifestyle. In our first update, we reported that it was the same car which completed a pan-American journey from Los Angeles to New York, taking in the glamour of Hollywood and Broadway, to demonstrate its efficiency. And now it’s been hanging out with the four-wheeled stars of the new Sweeney movie.
The big-budget film will hit UK cinemas in September. It’s a remake of the cult seventies police show and features the Flying Squad’s finest, Carter and Regan, chasing some Jaguar XFR-driving baddies in their Ford Focus ST.
So when we got the chance to drive the 503bhp movie-star Jaguar at the media launch of the Goodwood Festival of Speed, it seemed a good idea to take OE11 UCR along for the ride.
[[{"type":"media","view_mode":"content_narrow","fid":"69408","attributes":{"alt":"","class":"media-image"}}]]
Parked next to the deep red XFR, our 2.2-litre diesel still looks glamorous. Of course, it does without the bigger air intakes and bonnet vents of its supersaloon brother, but the sleeker face and reworked lights, courtesy of last year’s facelift, mean it still looks the business. Especially as it shares the XFR’s snazzy running lights and LED tail-lamps.

With only 188bhp on tap, the 2.2-litre diesel version doesn’t make as good a getaway car as the XFR, but back in the real world we’ve been impressed with our model. The engine is the lightest in the range and the reduced weight in the nose improves the already accomplished handling. The steering response is sharp, body control is excellent and the XF really shrinks around you on twisty roads: it feels very agile for such a large car.
Unsurprisingly, with its smaller wheels and softer suspension set-up, the diesel rides better than the XFR, although there’s still a disappointingly firm edge to the ride on bumpy roads. Yet it’s not enough to ruin what is otherwise a very refined package.
My route down to Goodwood in West Sussex started in London, before heading out on to the motorway and finishing on some nicely flowing A-roads. The 2.2-litre XF was well suited to the whole journey.  Around town, the stop-start system works smoothly, while the cabin is quiet and comfortable on the motorway and the car takes flowing A-roads in its stride.
Niggles? Well, you need to be doing 75mph to select the eight-speed box’s highest gear without labouring the engine excessively. But if you use the steering paddles in manual mode, the sheer number of gears on offer allows you to make the most of the car’s impressive 450Nm of torque.
Some of my colleagues have previously complained about our XF’s headlamps, and they’re right: the lights aren’t very good at illuminating stretches of dark country road. This is surprising, as xenons should perform better than that.
What’s more, while I love the classy blue backlighting and rising rotary gear selector, some elements of the cabin’s design are beginning to look a little old-fashioned. For instance, the touchscreen sat-nav’s mapping  isn’t as smart as the more modern systems found in the Jaguar’s German rivals.
But at the end of a tiring day at Goodwood, I was still very happy to be heading home in our diesel XF; the R model is faster, but is twice as thirsty, too.

“The XF is a very attractive choice, offering plenty of style, charm and luxury. But its German rivals are more efficient and therefore cheaper to run.”Ross Pinnock, Road test editor

“I’ve had one of these for a few months now and it’s ace. Much better than my previous Audi A6 and BMW 5 Series. I love it and feel special in it.”royball100, via www.autoexpress.co.uk