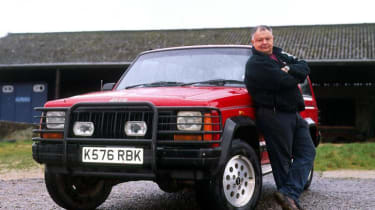 Apart from Land Rover, what other name epitomises off-road performance? It has to be the American Jeep, the original and some believe still the greatest. Of course, the vast majority of owners use them for far more basic purposes, and the debate about whether you need or simply want a showy 4x4 is as strong as ever.

If one model settles the argument it's the compact, estate-like Cherokee. Recently replaced, this iconic and classy sports utility vehicle now makes a very sensible household buy, no matter where you live. Here's why.

Driving The Cherokee may be one of the oldest off-roaders around, but you wouldn't guess so from driving it. Sure, it's not as sharp as some of its newer rivals, yet this all-American hero doesn't disgrace itself on the road, either.

If you can put up with slightly vague steering, admittedly improved on later models, and a firm ride, you'll probably like the way the Cherokee drives on the road. What's more, the Jeep's compact size means it feels surprisingly nimble around town.

Unlike many of its competitors, the Cherokee is also an excellent worker off-road or for serious towing. There are different 4x4 systems fitted depending on which model you choose. The 2.5 uses a Command-Trac part-time 4x4 transmission with a rear limited-slip differential, while the 4.0 features the more sophisticated Selec-Trac alternative, but unless you're talking serious mud-plugging, there's not that much to choose between them.

Three engines feature and, as you'd expect from a vehicle originating from the US, fuel economy is poor, even on the diesel. This 2.5-litre TD isn't too refined, either, but at least its 114bhp provides fair performance.

The petrol alternative is a four-cylinder 2.5-litre unit, but this is regarded as the poor relation to the pick of the pack, the lusty six-cylinder 4.0-litre. The former (initially 121bhp but detuned to 117bhp over the years) isn't half as smooth or punchy as the six but does, some would argue, benefit from a five-speed manual gearbox.

The rapid 4.0-litre, which was also successively toned down during its life from 181bhp to 171bhp, is saddled with automatic transmission on all bar the 4.0 Sport and Orvis versions. It's a smooth but sedate operator. A manual gearbox would certainly help economy.

In terms of fuel returns, there's not much in it. Expect around 21-22mpg from the 2.5 petrol and perhaps 20mpg from the bigger 4.0 six-cylinder, chiefly because it's lightly stressed. The TD returns 30mpg at the most.

Day to day Much depends on what you want a Cherokee for. As a serious off-roader or towing vehicle it makes a lot of sense, while its usefulness as a school run special is only compromised by its lack of interior room. Rear seat space is very tight and the squab is uncomfortably low set, too. Boot space is limited by the huge spare wheel hogging a lot of the room, although aftermarket kits are available to relocate it elsewhere. Another bad point is the omission of a split-fold rear seat.

The driving position on the early models was spoiled by a steering wheel set too close to the chest, while the interior layout is typically Stateside and chintzy. General comfort is fine and standard equipment levels excellent, though. All Cherokees benefit from remote control central locking, electric windows, powered door mirrors and tinted windows, with an alarm and immobiliser fitted after 1994. Alloy wheels of varying styles are universal across the range, the exception being the base 2.5 introduced in 1999.

Most interest lies in the luxurious Limited trim that's offered only on the 4.0. This spec adds air-conditioning, cruise control, powered leather-faced seats, a retractable cargo cover and illuminated vanity mirrors.

Until 1997 there was a posher Limited SE trim, boasting hand-stitched leather upholstery and burr walnut detailing. The true successor to the SE was the Orvis, and few other 4x4s are as luxurious � used prices reflect the high demand for this model. In contrast, the base 2.5 and 4.0 Classic (essentially value-for-money run-outs) feel too austere, but most of what you need is fitted.

Buying and owning Thanks to their blue-chip image, Cherokees hold their values well � the only exception being early 2.5 Sports, which can now be bought for well under £5,000 at auction. However, the Jeep isn't a cheap car to fix, so a good warranty and main dealer back-up is advisable. Chrysler's own approved plan is being updated this year, hopefully to rectify areas where it falls short. A vehicle exchange plan is currently lacking and the new cover will hopefully incorporate ancillary items such as the pricey catalytic converter, too.

Cherokees were imported into the UK long before they officially became available here, so there's a healthy band of specialists. These establishments offer cheap spares (either genuine or US aftermarket) and custom accessories.