The Kia Ceed line-up features a mixture of all-new and updated engines, all of which are compliant with the latest 6d-Temp emissions regulations. The 1.0-litre T-GDi is a revised version of the unit used in other Kia and Hyundai products, hence why we’re confident in recommending it. The engine returns 50.4mpg and emits a slightly high 128g/km of CO2 in standard form, according to the WLTP tests.

The entry-level 2 model has an Eco pack as standard. This comprises an Active Air Flap that opens and closes according to the engine’s temperature, cladding for the car’s underbody to improve aerodynamic efficiency, lower suspension and low rolling resistance Michelin tyres that fit the 16-inch alloys. Carbon dioxide emissions are a little high across the line-up compared to the class best, which is worth considering if you are looking at a Ceed as a company car and its impact on Benefit-in-Kind rates.

The base diesel version with six-speed manual transmission returns a claimed 60.1mpg, while emitting 122g/km of CO2, according to the stricter WLTP emissions test. The figures for the higher-powered 134bhp diesel unit slump a little to 56.5mpg and 130g/km, while the automatic is even less efficient at 54.3mpg and 135g/km - another reason not to opt for the auto, unless you have to.

The Ceed Sportswagon estate is also available with a petrol plug-in hybrid engine. Electric-only range is a useful 35 miles, with a combined overall fuel consumption of 188mpg - although this figure is only achievable if you utilise the hybrid system effectively and regularly charge the battery. Emission levels are low, with the PHEV emitting just 33g/km of CO2. 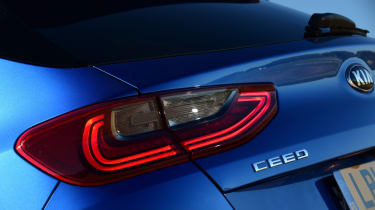 The remaining engine options are an all-new 1.4-litre T-GDi petrol, which replaces the earlier 1.6-litre GDi engine. This can also be had with both transmissions – returning 46.3mpg and 140g/km as a manual, or 45.6mpg and 141g/km as an auto. The higher performance option remains the 1.6 GDi petrol, albeit in updated form, and manages a claimed 41.5mpg and 155g/km of CO2.

Residual values for the Kia Ceed are higher than some of its rivals, although they still fall behind the VW Golf in that regard. A long equipment list and Kia’s transferable 7-year warranty help to keep values strong, and after three years and 36,000 miles you can expect to get an average of 41% of its value back.