New platform means more space inside and a better driving position, while all models get touchscreens as standard

Kia makes a big point of emphasising how the Ceed was designed at its European HQ in Frankfurt, Germany, for European tastes. A design evolution of the previous car, the Ceed is a pretty handsome, if generic interpretation of the modern compact hatchback. Simple surfaces help draw your attention to Kia’s established graphic elements – the ‘tiger snout’ grille and the high-tech headlamps. The LED daytime running lights within are standard across the range, and ape the square block shapes that were introduced on the GT model a few years ago. They stylistically link the car to the flagship Stinger saloon, too. There are 16, 17 and 18-inch alloys available, with the former built for comfort and efficiency, and the latter to complement the more luxurious and sporty GT-Line S and Ceed GT models. 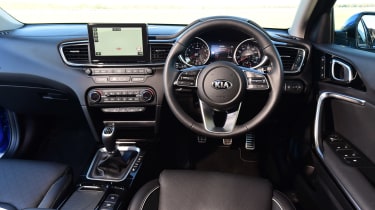 The Ceed is built on Kia’s new ‘K2’ platform. That means it's 20mm wider (1,800mm) and 23mm lower (1,447mm) than the outgoing model. Its wheelbase remains the same at 2,650mm, with the front overhang shortened by 20mm (to 880mm), and rear overhang extended by 20mm (now 780mm), helping to make the car look a little more sporty. The new platform helps improve the Ceed’s packaging, too, giving a bigger boot, at 395-litres with the seats up and 1,291 litres with them folded down. You’d be hard pushed to match those sort of capacities in any other family car this side of a Honda Civic or Skoda Octavia.

The fit and finish of the dashboard is pretty high – although the infotainment screen looks a bit lost, like it’s just been stuck on the dash top. The Ceed 2 is the only model that gets the most basic eight-inch screen, but the system works well and supports both Android Auto and Apple CarPlay. The screen’s resolution lags behind those of VW Group cars, but in terms of ease of use and menu layouts, it's among the best in the class. Unlike some carmakers, Kia has elected to keep a large number of core functions separate from the screen, retaining buttons and knobs for things like climate and volume control, which remain easier to use when on the move.

Getting the spec right of your Ceed is a little tricky because Kia doesn’t offer many option packages – if you want the uprated JBL stereo for example, you have to splash out on a higher-end Ceed, rather than just ticking the option box and modestly upping your monthly payment. The only tech option available in fact is the addition of a dash cam.