The Kia Ceed GT is the fastest model in the Ceed range, but is it worthy of a GT badge? 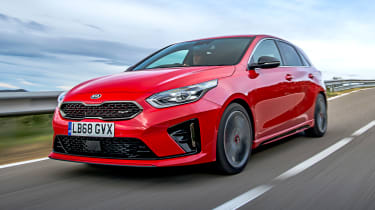 The Kia Ceed GT offers an ideal middle ground for performance fans who don’t quite wish to commit to a full-blown hot hatchback. It’s fun and exciting on the right road, yet compliant enough to remain as easy to use as the standard Ceed from day to day. Throw in a competitive price, lengthy warranty and generous standard equipment list, and the GT is a worthy range topper for the Ceed line-up.

The latest Kia Ceed range has lacked a sporty option until now. This is the new Kia Ceed GT: the quickest version of the third-generation family car.

However, it’s not a full-blown hot hatch: rather a warmed-up version of the conventional five-door. In other words, it sits below the performance (and price) bracket of cars like the Volkswagen Golf GTI Performance and Hyundai i30 N – instead competing against models such as the Peugeot 308 GT and Vauxhall Astra SRi.

Like both of those cars, the Ceed is powered by a 1.6-litre turbocharged petrol engine. It’s closely related to the unit used in the outgoing Pro_Cee’d GT, and its headline figures of 201bhp and 265Nm are pretty much identical - though the latter is produced across a wider rev range than before. The same engine is used by the new ProCeed GT shooting brake too, but there it’s offered exclusively with a seven-speed dual clutch automatic gearbox. The hatch is manual only. 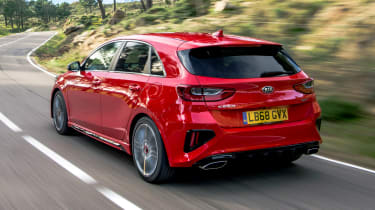 Kia has turned its attention to the Ceed’s suspension too. The GT rides 5mm lower than the standard hatch, the springs are stiffened and the anti-roll bars softened; changes that are claimed to help the tyres maintain better contact with the road during hard driving. Braking is catered for with 320mm discs up front (up from 288mm) and they’re thicker, to withstand bigger and repeated stops.

They're gripped by calipers that help the GT stand out from the rest of the range thanks to their red finish; one of a range of subtle superficial upgrades to the car’s look. The front end is treated to a deeper front bumper with gloss black trim along the base, while the grille gets a honeycomb pattern with red highlights. There’s red trim to be found on the deeper side skirts, too, while around the back there’s a small roof spoiler. The rear bumper gains a diffuser design flanked by a pair of twin tailpipes, as well.

Fire up the engine, and those pipes soon make themselves heard. The sports exhaust system emits a bassy parp, even in its more subtle ‘Normal’ driving mode. Switch into Sport, and the sound turns borderline antisocial. Highly appropriate for a warm hatch, in other words. Sport introduces some engine noise augmentation through the car’s speakers, too, which warbles under hard acceleration. Unlike some systems of this type, it sounds fairly natural.

The extra drama sets the GT apart from the rest of the Ceed range even when you’re driving around town, and it backs that up with a healthy shove of acceleration on the road. It’s not hot hatch-fast by any means – 0-62mph takes 7.2 seconds – but it’s an engine that enjoys being worked to extract its best.

But it’s the chassis where the Ceed GT offers up its most fun. String together a series of corners and the GT turns in sharply and grips strongly. Approach the limit of its grip and there’s a neutral, adjustable balance to the car, which gives the driver plenty of confidence to push on. The ride helps here, too; it’s more relaxed than full-fat hot hatches, so it soaks up bumps rather than bouncing from one to the next.

It’s not without its flaws, though. The steering, for example, delivers little in the way of feedback, and the ESP system can be a little too intrusive at times. The biggest let down is the manual gearbox: the shift isn’t the smoothest and the revs hang for too long, making every upshift feel like the clutch is slipping. On the plus side, the pedals – aluminium finished in the GT – are well placed for rev-matching downshifts. 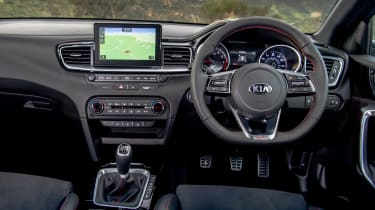 The rest of the cabin gets subtle upgrades to lift it beyond the standard Ceed. The black upholstery features red stitching, and the leather/suede-effect sports seats look fantastic and offer great support under hard cornering. There’s a flat bottomed steering wheel and black headlining, while the 4.2-inch screen between the dials features a Sports display that shows temperature and boost gauges.

The Ceed GT is priced at £25,535, and on a three-year PCP finance deal with a 10 per cent deposit, it costs roughly £329 per month. While the equivalent Astra costs less to buy outright, the Kia’s stronger residuals and more competitive rate of interest means that, on equal terms, the Astra costs just £1.50 less per month. For a car that is better equipped, more fun to drive, and available with a class-leading seven-year warranty, the Kia seems like a bargain.