So far, the only Kia Ceed we've tried in the UK is the First Edition model with a 1.4-litre turbo petrol engine, although we have sampled both the manual and auto gearboxes.

The changes Kia has made to improve the Ceed’s driving dynamics have paid off. Where the previous model was comfortable enough, it wasn’t much fun, but that has all changed now because the latest car rides and handles nearly as well as a Volkswagen Golf.

• Kia Ceed vs Volkswagen Golf vs Hyundai i30

It’s compliant and soaks up lumps and bumps well, although larger imperfections will still upset the Kia where the Golf remains composed. But at the same time, body roll is well controlled, the steering is direct, and there’s lots of grip. The Ceed can't rival the class benchmark, the Ford Focus, for the way it drives, but the Ceed still rewards being driven hard in a way that the previous version – and even its sister car, the Hyundai i30 – simply doesn’t.

The Sporty GT model shows the Ceed's chassis at its best. Stiffened springs, a 5mm ride height drop and more relaxed anti roll bars turn the Ceed into a fun warm hatchback which still manages to keep a pleasing level of comfort. 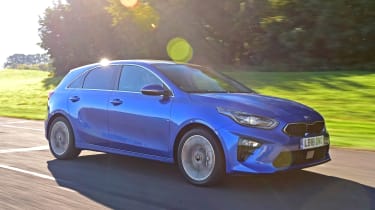 It’s a shame then that both manual and automatic gearboxes let the side down somewhat. The dual-clutch transmission isn’t as swift to change as the DSG in the VW Golf, and it's rather laggy when pulling away from a standstill. However, it shifts smoothly when used gently, and its software tuning is better than that of the same gearbox fitted to the Hyundai i30.

We’d choose a manual Ceed instead, if only because it's around £1,100 cheaper. It's still not great though; the engine revs tend to hang for a long time after the clutch is depressed, and it can make it very difficult to drive smoothly. It's not a disaster on conventional models, but on the sportiest GT, it's a real shame.

The Kia's 1.4-litre turbocharged four-cylinder engine isn’t as refined as the Golf’s 1.5-litre petrol, but it sounds okay and is flexible, too.

Refinement is impressive, with the Kia being very quiet at low speeds, although larger alloy wheels transmit plenty of road roar into the cabin at higher speeds. The 1.4 engine wasn’t quite as potent as VW’s 1.5 during our tests, and does make some slightly coarse metallic sounds at higher revs. However, the testing of the engine also revealed that its 242Nm of torque is developed low down, pulling the car along quite happily at just 1,500rpm.

Kia has also introduced a petrol plug-in hybrid engine for the Ceed Sportswagon. It consists of a 1.6-litre petrol unit, a 8.9kWh battery pack and a 44.5kW electric motor, producing 139bhp. 0-62mph takes around 10.5 seconds.

We’d also be tempted to try the 1.0 engine, as the Ceed is at its best when being driven gently. For more performance-minded drivers, the Ceed GT ‘warm’ hatch has a 1.6-litre turbocharged petrol engine, as it did when the original Cee’d hatchback debuted back in 2013. It’s not quite got the punch to compete with ultra hot hatches like the Honda Civic Type R, but the 7.2-second 0-62mph time is still suitably rapid. A bespoke exhaust system, which gets louder in sport mode, adds a little theatre to the GT even when burbling around town.

The two diesel units are familiar from their use in Hyundais, and are also notable for their low-down torque that makes light work of getting the car underway, particularly in stop-start urban traffic. However, we’d still opt for the smaller petrol engine, as it offers up similar power to the less potent diesel.