Clever packaging means decent space for adults to travel in comfort, while luggage space is excellent

The Ceed is now a family of models, so if the standard Ceed five-door hatchback isn’t quite the right fit for your needs, there’s a conventional Sportwagon estate, sportier Proceed shooting brake and XCeed crossover to choose from. That said, the Ceed’s latest platform has increased space in the cabin, both for passengers and luggage.

The Ceed measures 4,310mm long, 1,800mm wide (including the door mirrors) and 1,447mm high, making it a little smaller in every dimension than a Ford Focus. It retains the exact same wheelbase as the previous Cee’d, but some clever packaging means that space in the cabin is generally pretty good, with space for five adults at a push, plus an array of cubbies and pockets around the interior for oddments large and small.

Kia claims that rear-seat space has been improved, particularly for the shoulders of adult passengers, while there isn’t much of a centre transmission tunnel to speak of, making foot room for a middle rear-seat passenger.

Up front, the driving position has been lowered a little when compared to its predecessor, too. However, this is actually better experienced on lesser models which don’t have the 10-way electrically adjustable seat – the manually lowered driver’s seat has a better range of adjustment and allows you to get a spot-on driving position. They don’t have a sunroof either, which makes headroom even tighter in high-spec models. 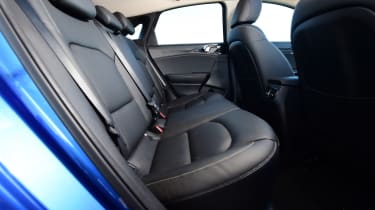 The seats and steering wheel offer comprehensive adjustment, and the view out front is good. However, the focus on perceived sportiness has included the design choice of very thick C-pillars, which compromise the view out of the rear.

The new platform means a larger boot. All models, including the sporty GT models, have the same boot capacity of 395 litres – more than a Volkswagen Golf or Ford Focus. The boot a useful size and shape, too, with the boot lip being almost 90mm lower than that of its predecessor. The Ceed also has a split-level boot floor, either giving a deeper load space, or allowing you to hide valuables below. The rear seats split-fold 60:40.