The Kia Sportage has been facelifted for 2018, adding subtle exterior changes and this new 48V mild-hybrid option... 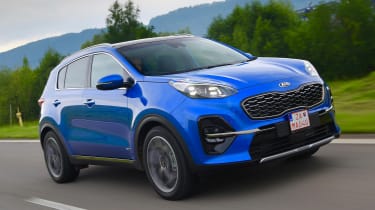 The Kia Sportage has competed towards the top of the family SUV class ever since this fourth-generation model came out in 2015 – and the latest round of updates have only strengthened its position. The lower powered petrol and diesel engines will continue to make more sense to most buyers, but those after a smooth, quiet and refined powertrain shouldn’t discount this new hybrid model. It’s cheaper than the equivalent Hyundai, and has a more competitive warranty, too.

This is the 2018 Kia Sportage. It might be hard to tell from the outside, but the subtle facelift – a new front bumper with extra shiny bits and a revised rear featuring a full-width light bar – hides some significant changes underneath.

The Sportage accounts for about 40 per cent of all of Kia’s UK sales. So given the car’s importance to the Korean brand, it’s not surprising that the upgrades under the skin show there’s little sign of complacency when fighting off rivals like the SEAT Ateca and Peugeot 3008.

While the design tweaks might be subtle, the most significant changes come under the bonnet. The revamped engine line-up sees both of the outgoing car’s petrol engines – naturally aspirated and turbocharged versions of a 1.6-litre direct injection unit – receive emissions tweaks to help them pass the latest Euro 6 Temp regulations. The the old 1.7-litre diesel has been ditched in favour of a more emissions-friendly 1.6, which, like the petrols, offers the same performance as the unit it replaces. 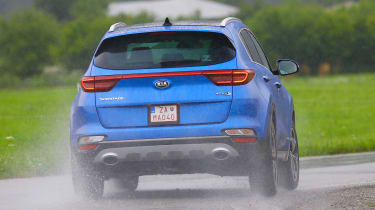 Perhaps the most interesting update is the car we’re driving here: the range-topping 2.0-litre diesel gets a new 48-volt electrical system which allows for a mild-hybrid assistance. It’s made up of a 0.44 kWh lithium-ion battery seated beneath the boot floor and a starter-generator unit that’s belt-driven off the crankshaft, helping the combustion engine under acceleration, topping itself back up when coasting or braking.

Officially, Kia says the hybrid tech doesn’t increase peak power or torque, instead reducing the engine’s workload under acceleration. This in turn, drops CO2 emissions by four per cent when measured on the new, more stringent WLTP tests against the old, non-hybrid version.

Out on the road, the difference compared to the old one isn’t drastic, but that’s more of a testament to how well the system works than anything else. The most obvious changes centre around the stop/start system: the electrical assistance allows the engine to cut out at around 10mph when slowing to a halt, restarting the engine much more quickly than before when moving off. A full road test will reveal what benefit (if any) this brings to fuel efficiency in the real world, but it can’t hurt.

The new tech brings a negligible compromise when it comes to weight, so the Sportage feels as neat and tidy to drive as ever. It’s the same 48V system found in the latest Hyundai Tucson, and is only available with four-wheel drive. This offers up loads of traction and plenty of stability - if not the levels of fun you get from an Ateca. It counters that with superior comfort though - especially in urban driving, where the Sportage does a great job of smothering bumps.

And that relaxed gait carries over to the drivetrain, where the electrical assistance endows the Sportage with an impressively smooth power delivery. The diesel unit itself might be slightly more clattery than Volkswagen's equivalent 2.0-litre TDI (and the new eight-speed auto gearbox can’t quite match the Germans’ efforts for response either), but it doesn’t need to be worked as hard as before, and remains very well isolated from inside the cabin.

As ever, the inside of the Sportage is a very pleasant place to sit. The facelift brings a new steering wheel, a revised driver’s display and tweaked air con controls, but the changes are subtle. It may not have the wow-factor of a Peugeot 3008, but certainly beats the Nissan Qashqai for sense of occasion. 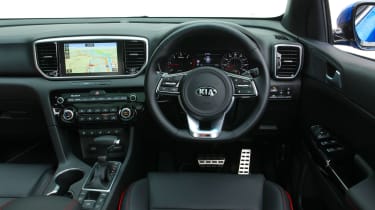 Its updated infotainment system knocks both rivals into touch, too: the new range-topping eight-inch display uses the same logical layout as before, but the screen itself produces sharper images and a faster touch response. Outside of the premium brands, it’s one of the best in the business. Base models use a smaller seven-inch screen, but still get Apple CarPlay and Android Auto as standard.

Move into the back and there’s the same roomy rear seats as before, and the hybrid doesn’t lose anything to the rest of the range in terms of boot space, either. The only compromise that the battery brings is that you get a puncture repair kit instead of a space saver spare like you get in some other versions.

From an ownership point of view, Kia ploughs on with its hugely competitive seven-year, 100,000-mile warranty - not that you’ll really need it, if the Sportage’s top-20 finish in the Auto Express Driver Power survey is anything to go by. Predictably, the hybrid is the most expensive model in the Sportage range - and by a couple of grand - but it is also the most powerful, and more frugal than the similarly performing 1.6 turbo petrol.