Even more hardcore Aventador SV is a big, bad Lamborghini – and possibly the best ever 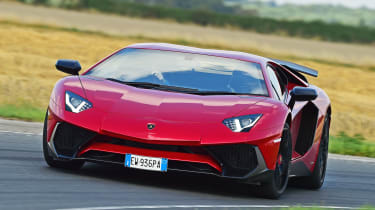 Outrageous looks, a scintillating engine and massive grip mean the hardcore Aventador SV is one of the great Lamborghinis – possibly the best ever. Embodying the spirit that elevated the brand to the top, it’s just how a supercar should be: a thrillingly addictive but slightly terrifying mix of old-school charm, huge power and modern technology.

Lamborghini is famed for its outrageous supercars, so when the Italian brand applies its ‘Super Veloce’ SV treatment to the already ridiculously potent Aventador flagship, you know the results are going to be magnificent.

And we’ll cut straight to the chase – that’s exactly what this new, even more focused Aventador SV is. 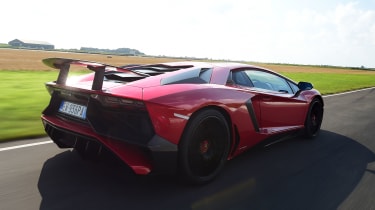 ‘Super Veloce’ translates from Italian as ‘super fast’, so this 217mph wedge sets its stall out straight away. It has the muscle to live up to the name, too, as lurking beneath that slatted carbon fibre engine cover is a 6.5-litre V12 producing 740bhp.

That’s 50bhp more than the standard car, and together with a higher rev limit and a reprogrammed version of Lambo’s seven-speed single-clutch gearbox that now shifts in just 50 milliseconds, it means the 0-62mph time is down to 2.8 seconds, helped by massive four-wheel drive traction off the line. 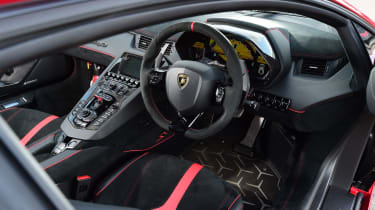 Rev it all the way out to 8,500rpm and the sound from the new exhaust system is glorious. The V12 wails and snarls, sounding like an old-school F1 car as the digital dash flashes at you to shift up.

Pull the right-hand paddle and the next gear slots home with savage ferocity – there’s no denying it’s fast, and even if it’s nowhere near as smooth as the best dual-clutch transmissions on the market, sometimes upsetting the car’s balance if you change gear in a corner, it adds real character to the whole experience of simply accelerating in a straight line at a scarcely believable rate. 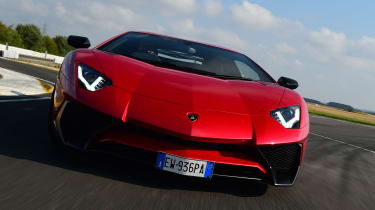 The onslaught is relentless, but at some point you’ll have to stomp on the huge 400mm carbon-ceramic brakes. They boast massive stopping power, but you can still feel every kilo of the big Lambo’s 1,525kg kerbweight when you’re trying to slow it from the inevitable huge speeds it can hit – and the same is true in the bends.

But turn into a corner and the car’s low nose locks on to a cornering line. The Aventador SV gets Lamborghini’s variable ratio dynamic steering as standard. We’re not huge fans of it on the smaller Huracan, but here it’s been retuned and feels much sharper and more direct. 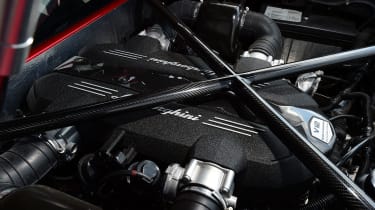 There’s nice feel through the wheel as to how much grip is on offer from the huge, sticky Pirelli tyres, so despite the car’s intimidating looks it gives you lots of confidence to push harder.

But this is still a fierce supercar that needs a firm hand, and it responds best to being driven hard. The sensations it relays back to the driver tingle through the F1 style carbon fibre chassis, while the sophisticated push rod suspension filters out bumps surprisingly well given the low-profile rubber. 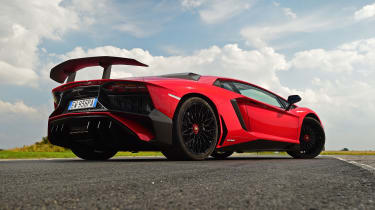 There are three selectable modes for the suspension, steering and powertrain: Strada (street), Sport and Corsa (race). With motorsport-inspired carbon fibre bucket seats that are light on padding, the firmer race mode is better saved for super smooth roads or tracks, but in the Strada setting it’s surprisingly compliant, with light steering making it easy to manoeuvre. Coupled with 690Nm of torque, it’s docile and easy to drive around town.

Although rear visibility is poor due to the rakish design, there’s a reversing camera to help when backing up, but you wouldn’t sacrifice the outrageous styling. 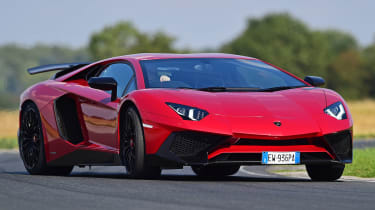 With an even sharper look to the Aventador’s angular body, the SV also gets a huge rear wing and a rear diffuser, so the Lamborghini’s looks will stop traffic in its tracks. But this aerodynamic setup is form following function, as Lamborghini claims the new body kit generates extra downforce at high speed to help stick it to the road.

Climbing in and out of the SV is an event in itself as the scissor doors arc skywards. Lower yourself into the cabin and you’re met by lots of Alcantara to reinforce the hardcore theme. 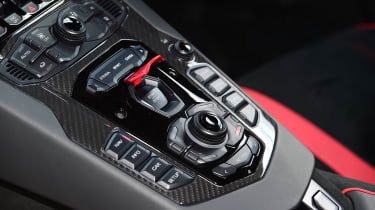 There’s still lots of equipment on offer, including sat-nav, DAB, Bluetooth and climate control, as well as practical features such as a front suspension lifter that means the tarmac-skimming front bumper doesn’t ground out over speed humps.