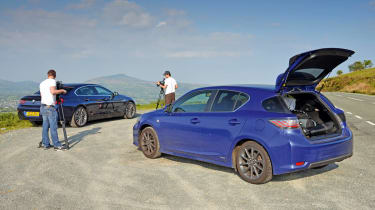 As head of motoring video for Auto Express, I’m used to being the star of the show. Yet lately our Lexus CT 200h has been stealing the limelight – mainly because it’s been commandeered by our film team as a chase car for its numerous video shoots.

Normally, nothing less than a large SUV or MPV would do, but the premium hatchback has been doing a sterling job of ferrying loads of camera equipment about. That’s because, despite packing a bunch of batteries, it still has a sizeable boot. The space is very usable, too – when you fold the seats down you’re left with a totally flat load bay.

This, plus the fact that there’s no boot lip to lift things over, came in very handy the other day when I finally managed to claw the CT’s keys back to go DIY shopping. Thanks to the van-like floor, I was able to slide heavy three-metre planks straight in and secure them easily by tying down the boot hatch.

And as I drove home slowly to ensure I didn’t lose my cargo, the car stayed in electric mode for the entire journey, so no fuel was used.

In fact, I’ve become something of an expert at eking out the maximum economy from the CT’s hybrid system. On my 11-mile commute into work, I’d managed a best-ever indicated fuel return of 67.1mpg – a figure that I thought would be tough to beat. However, the other day, I finally improved on that, with the CT 200h’s trip computer displaying a barely believable 71.9mpg as I rolled into the office car park.

Yet while that return looks impressive on paper, to achieve it took grit, determination and a complete disregard for the other motorists I was holding up. I can’t remember how many times I was honked at as I crawled along the A40 into London at 10mph under the speed limit, desperately trying to keep the car in fuel-saving electric mode. Even a Toyota Prius driver beeped at me.

Mind you, the way the Prius whizzed past me it’s unlikely the driver is seeing similar mpg figures to mine. And this got me thinking. What could the CT do when driven with more urgency? To find out, on my journey home, I stuck it in Sport mode and this time didn’t spare the throttle. Amazingly, the Lexus still didn’t dip below 41.8mpg.

Bearing this in mind, you may be wondering why the car’s overall fuel economy during the past month is only 43.3mpg. That’s because it’s mainly been driven hard on the motorway while fully loaded with heavy camera equipment – and, quite frankly, hybrids just aren’t as good as diesels when it comes to that kind of work.

When it’s not pounding up and down the motorway, or participating in impromptu fuel economy runs, the Lexus continues to impress me with its quality and decent levels of refinement. I’d happily trade some of the F Sport’s sharper responses for a more comfortable ride, but otherwise I’m finding the CT 200h a cosseting and capable upmarket hatchback. I just wish that it wasn’t in the spotlight more than me...

“The Lexus is let down by its CVT gearbox. The lightest touch on the throttle sends the revs skyrocketing – which, of course, severely compromises refinement.”Owen Mildenhall, Senior road tester

“I love my F Sport. It’s comfortable, quiet and delivers more than adequate performance. And I’m getting 56mpg without even trying.”prosperity, via www.autoexpress.co.uk