There’s no stopping Lexus! The Japanese brand that once copied its German rivals is heading out on its own. 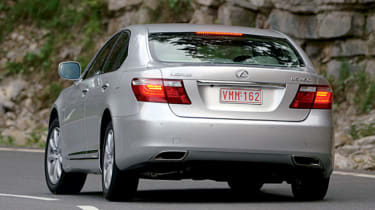 The LS460 is a big leap over its predecessor. An incredible array of safety technology makes it one of the most advanced cars in the world, and it’s still incredibly relaxing to drive, too. But we think the styling inside and out is a missed opportunity, which won’t attract new buyers. Still, this will be irrelevant to Lexus fans – for whom the legendary customer service is a prime reason for buying.

There’s no stopping Lexus! The Japanese brand that once copied its German rivals is heading out on its own. Dis­tinctive design and innovative technology are standard across the range, from the sharp-suited IS to the GS and RX performance hybrids.

But what about the new LS luxury saloon? On sale in January, it’s totally fresh from the ground up and has the world’s first eight-speed gearbox, plus the ability to park itself. Are we looking at the new class leader? Auto Express took an early test drive to find out.

One thing’s for sure, when it comes to flagships they have to look the part. And whether you’re a fan or not, you can’t deny that Mercedes’ S-Class and the Audi A8 are both distinctive cars. Although the LS is sleeker than before, it still lacks visual drama.

And it’s the same story inside. Build quality is excellent and a 45mm longer wheelbase means vast rear legroom, but the cabin’s design is little changed over the last model. There are still too many buttons – which look as if they are lifted from Toyota’s Avensis – and grey plastics. What makes the LS460 stand out is the technology you can’t see.

Not only is there a lane departure warning system but, should the driver fail to anticipate an impending collision, it also brakes the car automatically up to 0.7g. And thanks to a camera on the steering column – monitoring the driver’s eyes – this even takes place if he or she isn’t looking at the road. What’s more, the LS senses rear impacts, pre-tensioning the seatbelts and headrests milliseconds before a crash to minimise whiplash.

Parallel parking is under computer control, too. Pull up to a space, select reverse and the car steers automatically into the gap, using a rear view camera. All the driver needs to do is brake or accelerate! On the move, the car is still no sporting saloon – due to numb steer-ing and body roll – but it’s very good at cocooning its occupants from the outside world. The new 380bhp 4.6-litre V8 provides huge acceleration, yet barely makes a sound, and the eight-speed box shifts almost imperceptibly (although it’s a little reluctant to kick down).

Factor in air-suspension that floats the car over bumps and minimal road noise, and few saloons cover vast distances with such ease. So is the LS460 the best luxury car in the world? Well, it’s probably the safest, the cleverest and the best value for money – but as with its predecessor, this Lexus lacks a sense of occasion next to its rivals. It’s a model many potential customers will respect, rather than desire.