The Lexus RX L, the seven-seat version of the firm’s hybrid SUV, arrives in the UK… 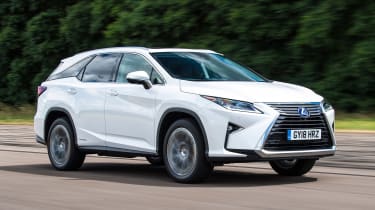 You won’t find another SUV that’s quite as comfortable or as easy to live with as a Lexus RX. But unfortunately, if you want a seven-seat SUV, you can do an awful lot better. The tiny amount of space on offer will leave young or small children complaining – especially as they grow older and taller. Our advice would be to stick with the excellent five-seat model unless you really need more space, in which case buy a Volvo XC90.

We Brits are rather fond of seven-seat SUVs. So much so that most large SUVs these days come with three rows of seats, and an increasing number of mid-size models do, too.

So it could be described as a no-brainer for Lexus to join the family-friendly fray with a slightly extended, seven-seat version of its flagship SUV, the RX450h.

If you like your SUV to offer a comfortable ride, exceptional refinement, plenty of kit and superb quality, then the RX450h could be the car for you. The fact that Lexus dealers consistently top our Driver Power customer satisfaction poll is icing on the cake. 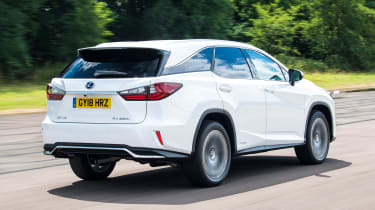 Sure, you’re not going to feel as involved behind the wheel in an RX as you would in a BMW X5, but then these are SUVs designed more for family holidays than track days. Lexus has always been more about an easy life and it does that job very well indeed.

But in transition from five to seven seats – which involves adding an extra 110mm behind the rear wheels, a couple of leather third row seats and an extra £2,305 to the price – Lexus has seemingly forgotten the need for people to actually sit at the very back - even tiny ones.

The seats fold electrically and artfully out of the boot floor, while the second row seats bow and slide to let you into the rear row. But middle row space will need to be severely compromised for children to sit in the third row, and even then head and leg space is very limited. For adults, the rearmost seats are best avoided.

What the L versions of the RX450h do give you is an increase in boot space from 453 litres to 495 litres, with a new maximum of 966 litres with all five rear seats folded. Handy.

And from the driver’s seat, other than the more upright rear screen being further away, you’re unlikely to notice much of a difference driving the seven-seat car – the view out is still good and there are plenty of clever touches that make the RX an easy car to live with. 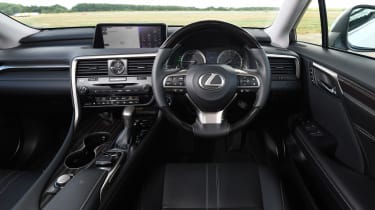 The focus is very much on comfort, starting with some seriously cozy front seats that looked after us well on a long three-hour motorway journey – especially as they can be heated or cooled.

The ride is similarly squishy over most surfaces, although potholes can still make you wince, while the hushed hybrid powertrain mixes a bit of electric power at low speeds with a bit of support if you ask for more power.

Do that and the smooth CVT transmission will show its angry side and increase engine noise, but it’s not a problem once you’ve eased off again and slip back into relax mode. The steering follows the same theme; it’s not especially sharp or quick to react, but does what you need it to do. 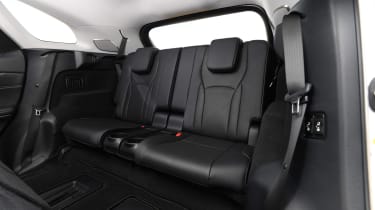 That hybrid system, comprising a 3.5-litre V6 petrol engine and two electric motors, certainly seemed to help economy on our test – we averaged 35mpg on a motorway run, a bit better than a similar-sized diesel SUV, but that jumped up to over 45mpg when we were rolling around town.

As is traditional with Lexus, the kit count on this Premier model is high and the available options low. You get a lovely wide infotainment screen, but its mouse-like controller remains too tricky to use. It’s also lacking the latest connectivity – there’s no Apple CarPlay or Android Auto and the standard Lexus nav isn’t as good as that on your smartphone. However, this model does get a fabulous 15-speaker Mark Levinson audio system that’s way better than those found in most rivals.

The interior feels pretty special even if quality isn’t quite up to Audi standards, but you know nothing’s ever going to go wrong (and if it did, the staff at your dealership would fall over themselves to put it right).