Top-selling Lexus RX is bigger, more powerful and cheaper to run than ever 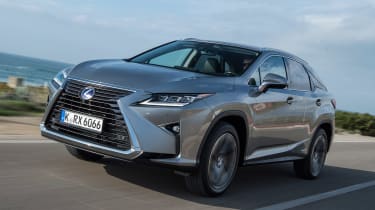 The new Lexus RX is bigger, more powerful and more efficient than ever. It won't appeal to keen drivers, but for everyone else the RX's bold design, relaxed driving experience and low tax rates make it well worth a look.

The RX is a very important car for Lexus - it's the Japanese brand's biggest-selling model worldwide, with 30 per cent of Lexus cars sold globally taking the RX moniker.

It's been six years since the third-generation RX was launched, and this fourth-gen model has plenty of all-new features. The most obvious change is the dramatic styling. While the last model was fairly handsome, it faded into the background somewhat. But there's no chance of that happening with this new model.

The huge grille and sharp LED headlights give the current Lexus family face to the RX, bringing it up to date with the IS, NX and RC models. The creased bonnet, arrowhead fog lights and large Lexus badge complete the front-end makeover, with origami-style folds and creases a recurring theme over the rest of the car. 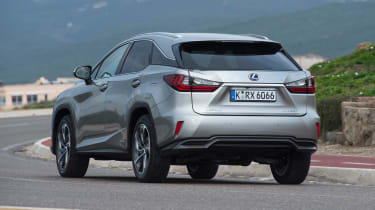 The C-pillars are blacked out for a Range Rover-style floating roof effect (a first for a Lexus) and the taillights wrap right around the side of the car for a bolder look. Like the smaller NX, the design isn't for everybody - but for many buyers the eye-catching looks will be a big draw over more established rivals like the Audi Q7 and BMW X5.

In the UK there is a choice of two engines. There’s a less-efficient 2.0-litre turbocharged petrol in the RX 200t, as well as a 3.5-litre V6 hybrid in the RX 450h. It was the latter we tested on the international launch.

The hybrid model will make up 90 per cent of sales thanks to its low emissions. It’s cheap to tax and one of the most cost-effective options in its class as a company car, too.

This powertrain is an updated version of Lexus' existing system, and still uses a CVT gearbox. Like the old model there's an EV-only mode that will last a short time (two miles or so depending on how you drive) on the electric motor, but most of the time you'll be using the petrol engine too - and in the past that's led to a big disparity between official and real-world fuel economy. Lexus says it's been working hard on improving this, though. We'll have to wait for a UK test to find out how effective it’s been.

When cruising and in traffic, the CVT gearbox and hybrid powertrain work together well, and with 295bhp available from the large-capacity engine the RX is surprisingly fast in a straight line. It doesn't feel as powerful on the road as its diesel rivals, however, as those cars boast more torque from lower revs, where the RX's maximum output of 335Nm isn't available until 4,600rpm.

The car's slow throttle response adds to this, and means you need to plan your overtakes just a few seconds earlier than in a torquey diesel. While the CVT gearbox does help the engine to deliver the right amount of power, there's no joy to be had driving around with your foot on the floor. Start to pick up speed and the engine sounds strained - but you'll have to listen closely, as you can barely hear it in normal motoring.

This is the real strength of the Lexus RX. It’s incredibly quiet, composed and comfortable on the move. Push on and you'll find the RX has better body control and more responsive steering than you might expect from a car like this, but enthusiasts will still favour cars like the Porsche Cayenne or Audi Q7.

On smooth European roads the RX was very comfortable thanks to adjustable suspension (changed via a dial on the centre console) and the sumptuous leather seats. The interior has a premium feel, with wood, leather and aluminium everywhere you look. But it can't match a Range Rover Sport or Volvo XC90 for that feeling of undisputed luxury. It comes close, though. 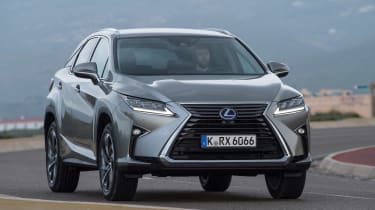 Thanks to the bulky batteries in the back, the boot is only 453 litres, which is way down on the BMW X5's 650-litre boot. It is similar to the 451-litre boot in the Volvo XC90 – but that car comes with seven seats. With the second row of seats down the Lexus load area expands to 924 litres, which is less than half of the space available in the BMW. There's no loading lip, but the opening is high up and the seats don't fold completely flat.