Thanks to the addition of a supercharger, Lotus have produced the fastest most powerful Elise yet! 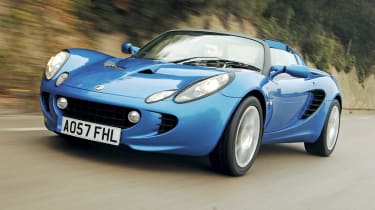 The latest Elise is impressive. It combines huge pace with superb handling for a thrill-a-minute experience. However, it’s as impractical as ever, and entry-level models start at £32,550 – without essential air-con. That puts the SC in direct competition with the highly polished Porsche Boxster. Think of the Lotus as a cheaper and more user-friendly alternative to the firm’s madcap Exige S, and it makes much more sense.

The entry-level Elise is no slouch, but that hasn’t stopped Lotus engineers from giving it a healthy dollop of extra performance, creating an all-new SC-badged edition.

Thanks to the addition of a supercharger, this is the fastest and most powerful Elise yet. However, the little Lotus has always been about fun rather than outright pace – so does the extra kick represent an improvement over lesser variants?

Priced £32,550, the SC is £4,000 more expensive than the 189bhp R, although the visual differences are only minor. Unique alloy wheels, a bespoke rear spoiler and large centre-mounted oval exhaust tailpipe help to distinguish the latest model.

There are even fewer extra frills inside, because the latest dashboard design, starter button and revamped instrument dials fitted to our SC are now stan­dard across the Elise line-up. Features include progressive change-up lights, which help the driver time gearshifts to perfection.

While changes to the appearance are limited, alterations to the perfor­mance are undeniably impressive. The sprint from 0-60mph has been reduced from 4.9 seconds in the R to only 4.4 seconds in the SC, and Lotus claims the newcomer covers 0-100mph in 10.7 seconds. The high-revving Toyota-sourced engine pulls strongly above 4,000rpm, and the only disappointment is the uninspiring exhaust note.

On the road, the handling is as entertaining as we’ve come to expect from the Elise, with lots of grip and bags of agility. The steering is excellent as well, while a set of slightly wider rear tyres help to deploy the additional power on tap. The supercharger improves the engine’s respon­ses low down in the rev range, making the SC more relaxing to drive.

The former, which was fitted to the car we drove, brings luxuries such as leather upholstery, full carpeting and improved noise insulation. The Super Sport kit focuses more on boosting performance, so it includes sports sus­pension and traction control.

However, air-conditioning is still an expensive £1,000 extra, and Lotus will charge you the same again if you want the optional hard-top as well.

Increased power and torque have transformed the Elise into a faster and much more civilised machine. But the SC doesn’t come cheap – especially when you consider the talents of its less powerful stablemates.

Rival: Porsche Boxster Few cars can match the SC’s price and performance, but when it comes to driving enjoyment, the first-rate Porsche Boxster is hard to fault. As well as being fast, fun and exquisitely built, the soft-top from Stuttgart is very refined.