The Levante SUV is heavy, but still super-quick, thanks to powerful petrol engines

When the Levante was launched, there was only one engine in the UK – a 3.0-litre turbodiesel – but the oil burner is no longer available, and there is now just V6 and V8 petrol power.

The V6 engine powers the base Levante and the Levante S version. On paper the S is slightly quicker than its closest rival, the Porsche Cayenne S. It’s an engine much better suited to the Levante than the diesel, and despite being more expensive to run, the wonderful soundtrack and strong performance make it worth the extra outlay.

The standard Levante V6 petrol engine joined the range in 2018. It’s slightly less powerful than the S, but it gets the same tuneful engine note and is cheaper to buy. 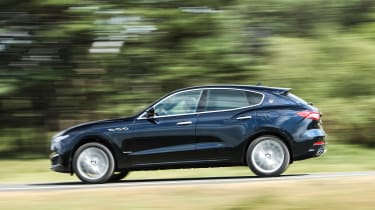 The Levante handles impressively for such a heavy, high-riding car, with a clear sporting intent and decent resistance to roll in Sport mode. In normal driving, 100% of the drive is sent to the back wheels, with power only sent to the front when slip is detected.

Any slip is kept in line through a system called Integrated Vehicle control. Introduced to the Levante range in 2018, it’s an ESP system that proactively adjusts itself against sliding, giving a near-seamless intervention - albeit one that drivers will rarely benefit from on public roads.

Leave it in the default mode, rather than Sport, letting the engine and gearbox do their thing, and the Levante becomes a competent cruiser, with a supple, refined ride. Wind and road noise isolation are respectable, if not quite a match for the Audi Q7. 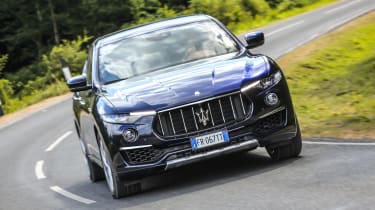 Not many owners will take their Levante off road; and while the air suspension can be raised to improve ground clearance, it’s more impressive that, at speed, the car lowers itself to aid aerodynamics and efficiency.

The core of the Levante's engine range is made up of a twin-turbo, Ferrari-developed V6 engine that's also used in the Ghibli and Quattroporte saloons.

GTS and Trofeo models make up the hotter end of the spectrum – we’re yet to drive the former, but the latter is a full-blown Porsche Cayenne Turbo rival with 572bhp from its 3.8-litre petrol V8 that shares some lineage with that found in the Ferrari 488.

This engine dominates the driving experience and is a joy to use – a rumbling exhaust note, buckets of torque and connected to a smooth-shifting eight-speed automatic gearbox. The engine encourages hard driving and, thankfully, the car’s chassis can keep up – body roll is well controlled and there’s lots of grip and traction.

The GTS dispatches the 0-62mph sprint in a supercar-rivalling 4.3s, while the Trofeo is quicker still at 4.1s, with a 188mph top speed.