Despite arriving in 2016, the Levante’s cabin feels dated and not that well built. The touchscreen is versatile, but kit is expensive

The Maserati Levante shares much of its make-up with the firm’s Ghibli and Quattroporte saloons, both of which made their debuts in 2013. As a result, the platform is fairly fresh and employs a blend of steel and aluminium for strength and to save weight where possible, including the bonnet, doors and bootlid. This also has big implications for safety, so there’s a large amount of strengthening to reinforce the body, but Maserati has still managed to keep the Levante’s weight distribution at a perfect 50:50 split. There are aluminium suspension components for better control, too, so on paper it’s got what it takes to match the Porsche Cayenne for on-road ability.

As you climb up into the cabin, the design follows the underpinnings and echoes the look of Maserati’s saloons, with a centrally mounted 8.4-inch touchscreen infotainment system flanked by a pair of air vents. There’s an analogue clock above this, while the wide transmission tunnel comes covered in glossy trim. The rest of the cabin is lined with soft leather, and feels plush and comfortable to sit in.

The metal gearshift paddles behind the steering wheel are large so that they’re always easy to reach. In terms of both feel and operation, they put the cheap feeling alternatives in many German rivals to shame.

It’s just a shame that the rest of the cabin isn’t a match for quality. Updated leather materials feel wonderfully soft, but there’s still one too many flimsy buttons dotted around the place compared to its rivals. The lid for the cupholders in the centre console feels particularly poor in quality. 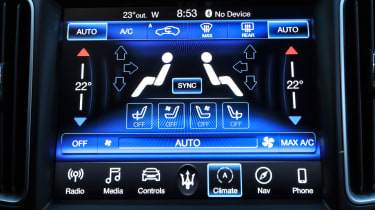 The Levante uses a similar infotainment system to that found in other cars under the Fiat Chrysler Automobiles umbrella, including some Jeeps and Fiats. While it’s been reskinned for Maserati, it’s nowhere near as good as rival systems from Porsche, BMW or Audi.

DAB and sat-nav are standard, and apart from the climate control, everything can be controlled from the touchscreen, with downloadable apps available alongside features such as internet radio. Though the interface isn’t the prettiest or the most intuitive to use, it’s available with both Apple CarPlay and Android Auto connectivity.

While the basic tech is there, the system isn’t the most logical, so you often find yourself fishing around for the right option. Given the capacitive touchscreen’s strength, the rotary controller underneath seems redundant, too.

Still, the optional stereos are worth a mention. The regular hi-fi can be upgraded to a Harman/Kardon unit, or a Bowers & Wilkins system, which is among the best in the business.