A few years ago, the idea of a Maserati SUV would’ve sent shivers down the spine of Italian enthusiasts. But, the customer is king, and other equally sporty manufacturers have demonstrated that there is clear demand for crossing over to higher-riding, five-door family transport. It also helps with the balance sheet, too. 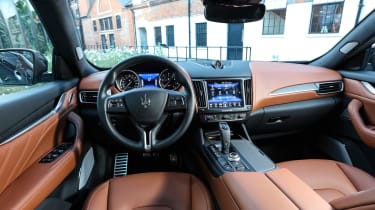 The diesel is no longer available, but is certainly the most affordable to run and could prove to be a sound used purchase, with official combined fuel economy of 31.0mpg. However, during an extensive week-long road test of the diesel model we achieved only 29.2mpg.

The petrol-powered models aren’t especially cheap to run: the entry-level V6 returns up to 22.6mpg on average with 269g/km of CO2. The GTS and Trofeo models are the least efficient, returning just 17.9mpg and 17.8mpg, respectively.

Given the prestige badge and powerful engines, it's no surprise that the Levante sits in some of the highest insurance groups, so premiums will be high. Mind you, it's about on-par compared to its rivals.

Maserati is predicting strong residual values for its first SUV. Official data suggests it’ll hold on to more than 50% of its value after three years and 36,000 miles. That’s around the same as an entry-level Porsche Cayenne, though higher-spec (and more expensive) models, will lose more value over the same period of time.