The Maserati Levante is a deceptively big car, but with only five seats it can’t rival cars like the Audi Q7 for versatility

While the Maserati Levante is a natural rival for the Porsche Cayenne on price and has bigger external dimensions, in terms of practicality it’s closer to the smaller Porsche Macan SUV.

The 580-litre boot is 90 litres down on the Cayenne’s, and thanks to the raised ride height you have to lift bags high to get them past the bumper. This is helped by the easy entry system that drops the suspension by 45mm to its lowest setting, but in reality few owners will take the time to use this feature on a regular basis.

Inside, despite the big centre console, storage is acceptable, with a tray in front of the gearlever, two cup-holders adjacent to it and a big, lidded storage area in between the front seats.

The driving position is excellent, thanks to a huge range of adjustment. This doesn’t just include the wheel and seats, but the pedal box, which electrically moves back and forth via a switch on the seat

Despite its coupe-like styling, the Levante is actually 18cm longer and 3cm wider than a Porsche Cayenne. With only five seats, it’s more comparable to the Porsche than something like an Audi Q7 – though in terms of sheer size, it’s not much smaller. 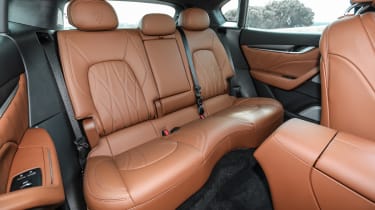 Space in the back of the Maserati Levante is generous, and there’s plenty of room for two adults – with generous head and legroom. Sitting three abreast might be a bit of a squeeze, but it’s certainly possible for shorter journeys. There’s no seven-seat version, meaning rivals like the BMW X5 and Audi Q7 have the edge when it comes to outright passenger space.

The Levante’s boot is a decent size, but is more comparable with cars like the BMW X3 than the larger X5. The 580-litre load bay is 70 litres smaller than the X5, and 190 litres shy of the cavernous Audi Q7.

The load lip is a little high, but no worse than it is in rival models, while the standard powered tailgate is a useful touch. The rear seats split-fold 60:40 to reveal a big (but undisclosed) load area, meaning the Levante could prove useful for the occasional trip to the tip.