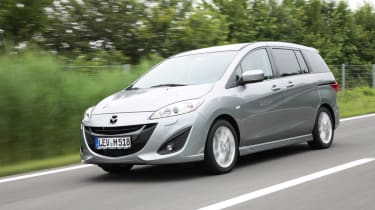 The Mazda 5 offers space in abundance, and its clever seating and twin sliding doors make shifting people and luggage very easy. The new exterior look might not be to everyone’s tastes, but the interior is one of the firm’s best yet - particularly if you opt for the satnav system that's been co-developed by TomTom. It’s likely to give the new Ford C-MAX a run for its money in the driving stakes, and wil be competitively priced, but its let down by a small choice of engines.

It’s the Mazda that goes with the flow. The all-new 5 MPV is the first car to be completely styled using the firm’s nagare design language. Meaning flow in Japanese, it gives the car a controversial look that’s sure to divide opinion. The car doesn’t arrive in the UK until October, but Auto Express attended a special sneak peak event to get to grips with Mazda’s new challenger.

The newcomer’s looks are immediately striking. It the front, the 5 shares its nose, complete with gaping grille, with the Mazda3, which also provides the underpinnings for the MPV. But it’s in profile that the nagare influence is most felt, with three waves which undulate down each flank. The creases in the bodywork are sensitive to colour, so on lighter cars you barely notice the striking lines.

It’s the car’s rear which is really set to split opinion. Thanks to the rising shoulderline, there’s a large mass of metal between the bottom of the rear screen and the taillights. This serves to make the rear end look bulky and rather ungainly. The runners for the sliding rear doors are fairly well incorporated, but neither this nor the taillights look as good as the simple yet elegant form of the previous car.

Once inside, the interior is one of Mazda’s best. The dash is awash with buttons, but all the major controls are easy to operate and are located intuitively, from the electric sliding door releases to the air conditioning controls.

As before, the 5 features flexible Karakuri seating for seven. The middle bench seats three, with the middle chair folding into each outer chair when not needed, aiding access to the rear.

The middle row tilts and slides forward, further improving access to the pair of rear chairs. Sub-six foot adults will be able to make short trips here, but they are better suited to children. With the rear row of seats up, boot space is tight, but the seats tumble forward with ease, leaving an ample load space which hides a small underfloor storage area and full-size spare.

Around 60 per cent of Mazda5s are bought by private owners, meaning that the car is likely to cover fewer miles, making the 2.0-litre petrol likely to account for half of sales. The engine is very quiet and refined, and features Mazda’s very clever i-stop stop start system which aligns and primes the pistons when stationary for a faster re-start.

However, on the move, its not the most responsive unit, particularly now the gear ratios in the six-speed gearbox have been lengthened to reduce all-important CO2 emissions. Mazda’s downsized, turbocharged SKY units, due early in 2011, can’t come soon enough, but in the meantime, it may be worth waiting for the 1.6-litre diesel due shortly after the car is launched here.

Aside from the engine, a lot of work has been done to make the steering more linear – or Touitsu-kan in Japanese. Just like the VW Touran and a number of BMW models, the steering column features a rubber damper which reduces the impact of sharp inputs, making for a smoother ride for passengers.

The platform is distantly related to the Ford Focus, so the 5 drives very well indeed. The ride is very comfortable, even on 17-inch wheels, and the new steering only helps the precision you have to place the car on the road – it almost drives too well for a car that will spend its life ferrying people and luggage from A to B.